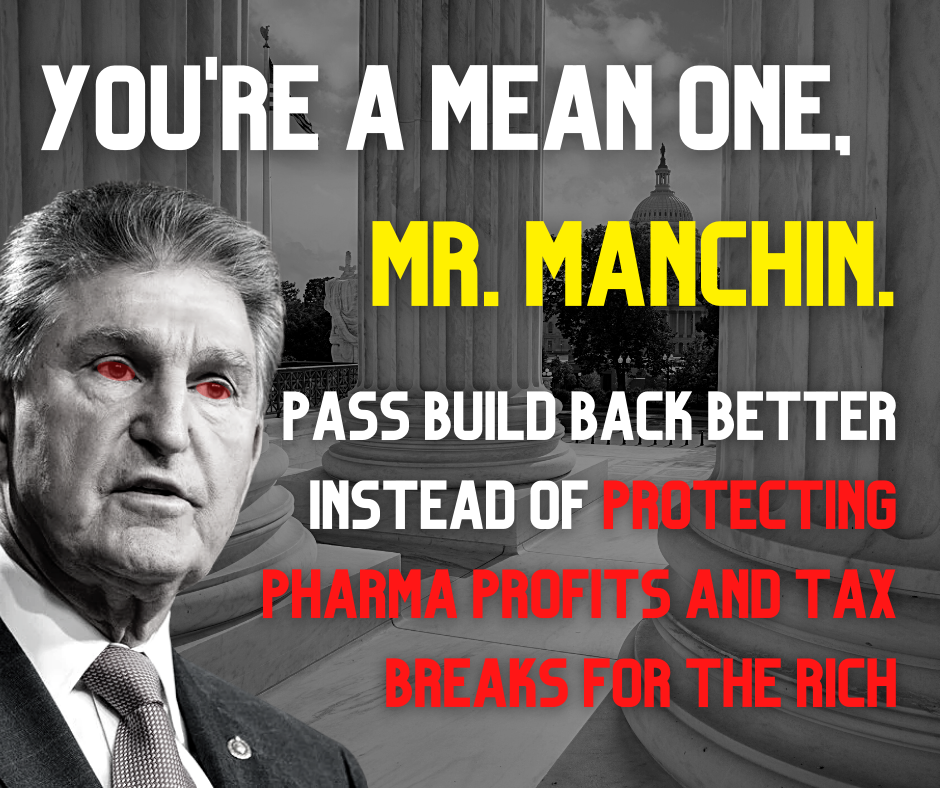 After an event-filled weekend, is the big story Joe M or O-EM Chron -- Maryland sees a spike in cases while Larry Hogan preens on Fox News Sunday with a "What, me worry?" while our West VA neighbor Sen. Joe Roadblock attempts an on-air bill kill, upstaging Hogan for Fox airtime.

Dems scramble to reset the Build Back Better bill for passage while alternately scorching the earth around Manchin only to be reminded he lives on a yacht ("houseboat") in the Potomac.

Cases climb in our state but there's a giant surplus to spend; good news about e-vehicles and support...

BBB crash rocks progressives, who thought they had a promise...

“Progressives’ biggest fear about the Build Back Better Act has come to pass -- There’s a reason they wanted the social spending bill tied to infrastructure.”

POLITICO Playbook: “Not 24 hours after Sen. JOE MANCHIN pulled the plug on President JOE BIDEN’s Build Back Better Act, Democratic leaders are scrambling to revive it. White House officials are reimagining a scaled-back version of their social spending package that they hope could win Manchin’s (D-W.Va.) approval. And rank-and-file Democrats are ratcheting up pressure on the West Virginian to recant and get back to the negotiating table. …progressives gave up a host of their top priorities to endorse the current BBB framework — and trusted in Biden to deliver Manchin in return.” Not yet. Some Dems are counseling “less is more” and a shorter wish list with ten-year full funding might get Joe M back on Joe B’s team. As usual, Playbook counsels following the money but also the retweets, noting White House heavies like Ron Klain are retweeting some House Dems who embrace “less is more”…

Jim Tankersley in the NYT also opined this "less is more" approach could be a path back to 50+1 in the deadlocked Senate. In the early version he gloomed a less is more reset “would force the White House to once again make difficult choices about which party priorities to leave on the cutting room floor.” Tankersley added in a new top in a Monday a.m. version of the story that Manchin’s belief – or excuse – that BBB is inflationary is not backed by most economists. “The disconnect between economic reality and Mr. Manchin’s stated concerns has exasperated the White House…”

Our state seems to have the flipside of Manchin’s problem with BBB -- $6 BILLION SURPLUS CREATES SPENDING PROBLEM: Lawmakers and Gov. Larry Hogan have a nearly $6 billion problem. Budget analysts say the state’s financial picture, at least in the near term, has improved. Forecasts project the state can expect nearly $6 billion more in revenue than expected. The result will be billions in surplus over the same period and no shortage of ideas on how to spend it. (Daily Record, paywalled).

COVID TESTS HARDER TO FIND: As Maryland experiences the first signs of another winter surge, COVID-19 tests are now more difficult to come by. Many test sites are open only a few days at condensed hours, with few night and weekend slots available, and the test kits offered by drugstores are pricey, if they can be found on shelves at all. The Baltimore Sun.

Larry Hogan said over the weekend, however, that he would not call for new restrictions or closings. Preening on Fox News, he said he was concerned about the rising cases and hospitalizations, but… But Larry, how do we know how bad it is? COVID DATA REMAINS HARD TO COME BY AFTER CYBERATTACK: Maryland state officials remained quiet Friday, nearly two weeks after a cyberattack interrupted coronavirus data reporting, as residents and state lawmakers escalated calls for fresh numbers.

Oh, maybe it was the economic news, not bad… STATE SEES SLIGHT JOBS GAIN IN NOVEMBER: Maryland’s economy gained 8,400 jobs in November and the state’s unemployment rate decreased from 5.7% to 5.4%, (U.S. Department of Labor’s Bureau of Labor Statistics on Friday morning) -- the lowest numbers since the beginning of the pandemic in March 2020.

Kamala Harris visits Brandywine …. County Exec Alsobrooks reported over the weekend that dignitaries including our two Senators joined VP Harris Friday for a tour of the County’s Department of Public Works & Transportation’s (DPW&T) Maintenance Facility and a briefing on the county’s electric vehicle program. “We have already achieved a 10% reduction in greenhouse gas emissions in the County fleet, well on our way to meeting our goal of a 25% reduction.”

Alsobrooks bragged “We currently lead both the State of Maryland and the DC Metro area in community solar deployment, and the County is home to the State’s first large-scale community solar plant and the largest Organics Composting Facility on the East Coast.”

The state altogether is not falling behind, Capital News Service reports: In move to electric vehicles, Maryland is doing better than most

Fair Elections inches up -- A vote on local campaign finance reform nears: The Baltimore County Council is set to vote on a bill that would set up a public campaign finance system in the jurisdiction, potentially creating a tiered funding system to prioritize smaller donations. (Maryland Matters)

Oh, maybe it was the economic news, not bad… STATE SEES SLIGHT JOBS GAIN IN NOVEMBER: Maryland’s economy gained 8,400 jobs in November and the state’s unemployment rate decreased from 5.7% to 5.4%, (U.S. Department of Labor’s Bureau of Labor Statistics on Friday morning) -- the lowest numbers since the beginning of the pandemic in March 2020.