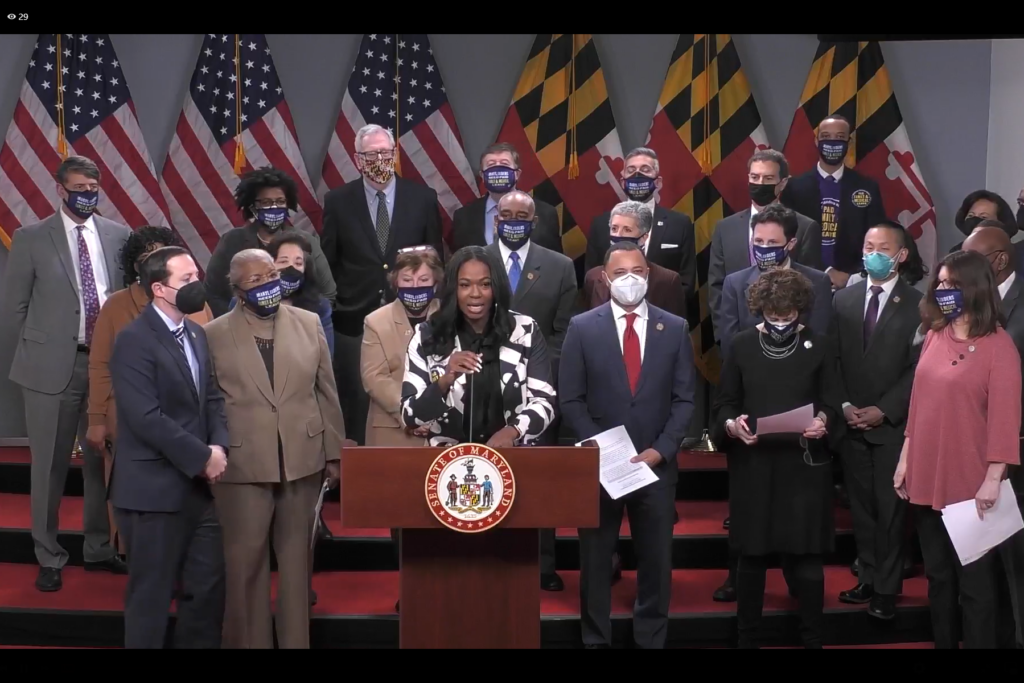 Maryland's Senate leadership, initially cautious about the highly popular paid family leave concept, yesterday got on board, as this article from Maryland Matters shows.

Find out more about this bill and its backers -- including Progressive Maryland, who testified in its favor to a House committee Feb. 15 -- in our BlogSpace.

Sen. President Bill Ferguson (D-Baltimore City) said the legislation, which has been introduced twice so far this term without gaining traction, is “going to pass this year.”

“For over two years, we have suffered through an unbelievable, unimaginable pandemic. Marylanders are still struggling to support their families,” Ferguson said. “Now, more than ever … as we think about what the world looks like moving forward, Marylanders need to have the support they need to get through their toughest moments in the future.”

Ferguson was joined by several lawmakers in making the commitment; House Speaker Adrienne A. Jones (D-Baltimore County) listed the bill among the chamber’s top priorities earlier this year.

The Time to Care Act, sponsored by Sen. Antonio L. Hayes (D-Baltimore City) and Del. Kris Valderrama (D-Prince George’s), would allow all Marylanders, both part-time and full-time employees who have worked 680 hours in the past year, to take 12 weeks of paid leave following childbirth or to take care of themselves or a family member experiencing serious health issues.

[Find out more about this bill and its backers -- including Progressive Maryland, who testified in its favor to a House committee Feb. 15 -- in our BlogSpace.]

“While some states and corporations and nearly every other developed country on the globe have taken a purposeful and strategic approach to family leave, Maryland has remained behind, stuck in a framework from the past that ignores the realities that the modern workplace and workforce have,” said Hayes.

Depending on their salaries, workers would receive a partial wage replacement of between $50 and $1,000 a week.

The program would work by establishing a statewide family leave insurance program, which would include contributions — split evenly by an employee and employer — up to 0.75% of an employee’s wages. Legislative analysts estimate that annual revenue into the insurance pool would reach $1.8 billion by 2027.

“The state of Maryland needs to attract and retain the best workforce we can, which is only possible if we offer a high quality of life with competitive benefits from employers,” Hettleman said.

Ricarra Jones, political director of 1199 Service Employees International Union, said advocates want to be sure the bill covers all workers, replaces a significant share of lost wages, is affordable to businesses and individuals, and protects workers from adverse actions if they use leave.

Sen. Joanne Benson (D-Prince George’s) said paid family leave “should not be viewed as a privilege, but as something that is humane and just.”

The House and Senate versions of the bill were considered at bill hearings earlier this month.