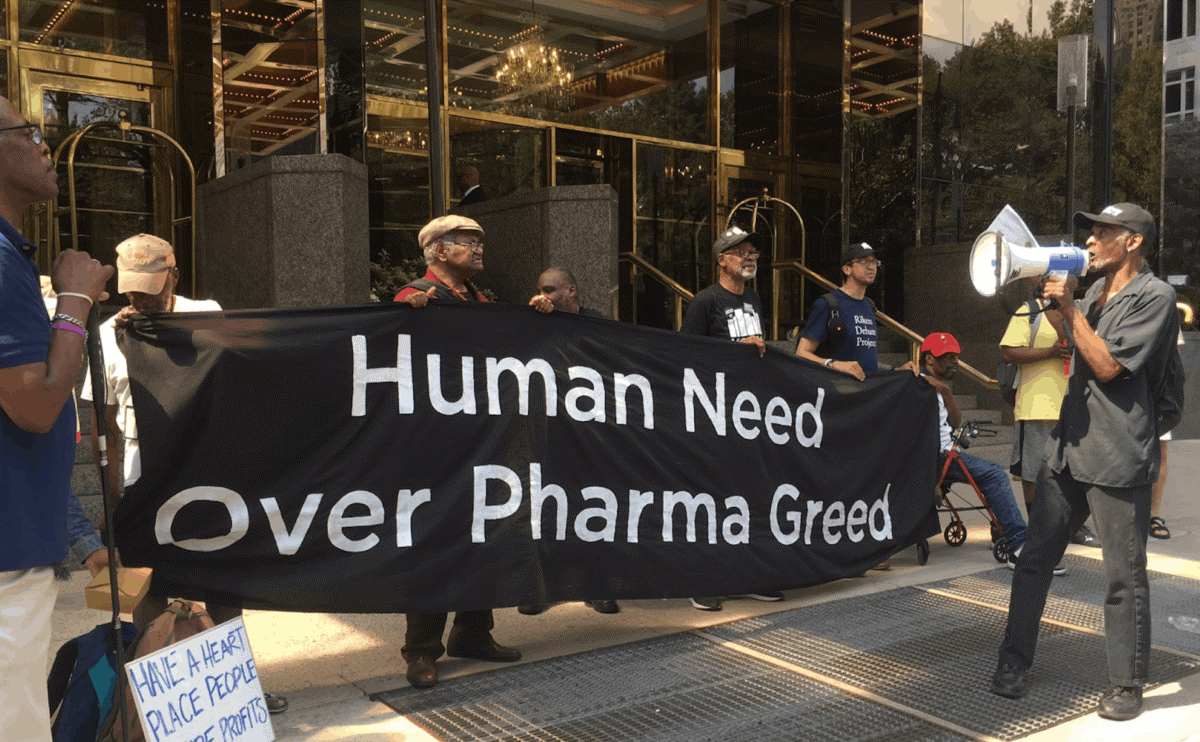 While activists fight around the country to lower the prices greedy Big Pharma charges for high-priced drugs, an innovative panel in Maryland to cut those excessive prices is stalled by the governor's refusal to release its appropriated funding.

Meanwhile in Maryland, legislation passed by overriding Gov. Hogan’s veto this spring would create a panel to reduce skyrocketing drug prices in Maryland. But as Maryland Matters reports, below, Hogan has stymied that action by withholding the funds designated for the panel and stalling on appointing his designee.

Huynh reports that 12 People’s Action member groups participated in the nationwide events, which were part of a national push made by the Lower Drug Prices Now campaign, which includes dozens of labor and activist partner groups, including the AFL-CIO, the AFSCME, the Alliance for Retired Americans, Health Care for America Now (HCAN), Moms Rising and Social Security Works. In total, there were 55 actions in 34 states. [People’s Action is the national organization of which Progressive Maryland is a state affiliate].

This campaign advocates for lower drug prices through reforms that rein in drug corporations’ monopoly power, require the drug industry to negotiate fair prices with government; and to hold corporations accountable for price-gouging.

“They’re jacking up these prices, and they’re killing people. If you don’t take the medicines you need, you die,” said Steve Derby, a retired engineer from West Hartford, Connecticut. “And if you pay the price, you can’t afford to live.” Derby is a member of the Connecticut Citizen Action Group .

The stranglehold big pharmaceutical companies hold over patents also dramatically harms those affected by Hepatitis C. A once-daily treatment, Harvoni, can cure the disease, but the drug’s maker, Gilead Sciences, charges over $1,000 per pill, or $94,500 for a full course. Many insurance plans refuse to cover the treatment.

“That’s going to exacerbate the spread of the disease: it’s like a death sentence,” said Bobby Tolbert, who rallied with other members of VOCAL-NY on the steps of the Trump International Hotel in Manhattan. “People fall through

the cracks of the system, because they’re not able to get that treatment.”

And while activists rallied in a dozen states to put their voices behind drug price reform, Maryland’s forthright legislative push to accomplish that reform was confounded by the governor’s resistance.

“The board has been authorized under legislation passed during this year’s General Assembly session, and it is charged with lowering the costs of runaway prescription drug prices.

“Under terms of the law, Hogan is also supposed to designate someone to serve on the board, but that hasn’t happened yet,” Josh Kurtz wrote in Maryland Matters. And a Hogan spokesman said there is no timetable yet for appointing someone.

“Hogan also has yet to release funding that the General Assembly set aside to establish the board – part of an ongoing dispute with lawmakers about allocations for certain legislative priorities,” Kurtz added. “The budget passed by the Maryland General Assembly included $750,000 in funding for the Prescription Drug Affordability Board to hire staff and begin its work.”

So what the Baltimore Sun called “Maryland’s chance to lead on drug prices” with a first-in-the-nation law is stalled by the reluctance of Larry Hogan to anger Big Pharma, despite its defeat and veto override on this bill. GOP hopes nationwide, not just in Maryland, hinge on such deep-pocketed corporate bulwarks against small-dollar activism.