These are remarks by Progressive Maryland health care organizer Beth Landry at Saturday's candlelight vigil for the victims of gun violence in Las Vegas and advocacy rally for real health care -- single-payer Medicare for All. The Oct. 7 vigil and rally took place in Lawyer's Mall before the State House.

/By Beth Landry/ We have gathered here tonight for many reasons. One of those reasons is to remember those who perished late Sunday evening in Las Vegas, Nevada.

Tina Frost, a 2008 graduate of Arundel High, is one of the critically injured, and she is on a ventilator in intensive care in Las Vegas from her injuries.

A nation that does not prioritize healthcare for its citizens suffers the untold losses of a lack of preventable care. The writing on the wall is that our elected officials care more about the NRA lobby, their donors and large corporations than they do about ensuring that the people of our nation have quality of life, including the ability to seek care for behavioral and mental health disorders.

Last Sunday, I was in Las Vegas. I boarded my plane to a cacophony of phones alarming from the news update of an active shooter. The last time I remember simultaneous alarms ringing that way, it was on my nursing unit with every doctor’s pager ringing out at the same time, alerting us to the 2009 Metro crash, and to be ready for a mass casualty incident. I felt my gut sink, knowing something was seriously wrong. 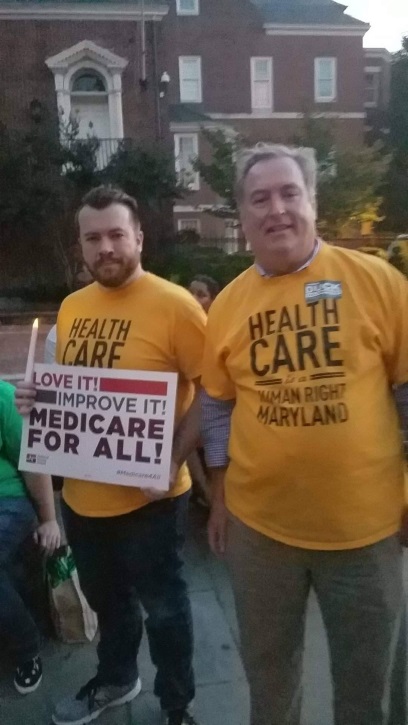 A nation that does not prioritize healthcare leaves Marylanders like Tina Frost to rely on GoFundMe fundraisers for their medical bills. Over 60% of people believe that the government should guarantee healthcare for its people. These two things are ideologically as far apart as it gets.

Everyone here has been or will be a patient. It is a mathematical certainty. From our birth, to our last breath. Everyone in Maryland and nationwide will be impacted by decisions our elected officials make or avoid making, even if they do not protect or support us.

Last Saturday, the deadline was not met for Congress to reauthorize the Children’s Health Insurance Program, or CHIP. CHIP provides low-cost health insurance to children in families that earn too much money to qualify for Medicaid. Enacted in 1997, CHIP is a companion program to Medicaid, where states had the option to set up an independent CHIP program or extend Medicaid eligibility to children up to 18 years old. With Medicaid and CHIP filling the coverage gaps, 95 percent of children have health coverage. Nine million children and their families nationwide, with nearly 138,000 in Maryland, rely on CHIP for essential health needs. Some states have exhausted their funds, while others have a short amount of time before their money runs out. Any retraction of our current Medicaid system or failure to reauthorize CHIP will put the lives of Maryland children at risk.

Conservative priorities were, and still are, to dismantle our healthcare system by any means necessary. This includes sabotage of open enrollment for the Affordable Care Act, passing a budget that makes continued funding for Medicare, Medicaid and CHIP as we know them impossible, and passing tax reform that shortchanges lower- and middle-class families while letting millionaires and billionaires reap the benefits.

The House voted, and PASSED! their Budget Resolution on Thursday [October 5th]. This included massive cuts to ACA, Medicaid and Medicare to pay for trillions in tax breaks to millionaires and corporations. The resolution in the Senate passed through Committee. Representative Andy Harris in Congressional District 1 voted to SLASH healthcare to shreds. This is SHAMEFUL! We need to hold him accountable! Our Governor needs to take a stand for the people of Maryland and denounce this Budget Resolution! We stand firm: Don't cut Medicaid & Medicare to pay for tax breaks for the rich and corporations!

Nurses across the country like me see firsthand the tragic effects of a health care system that is profit-driven.  Many patients in Maryland are not able to receive the care they need to survive, and they either go without care or wait until it becomes a crisis and seek care in emergency rooms.  Governor Larry Hogan, every Maryland Congress member, and every state legislator needs to protect and EXPAND millions of Americans' access to healthcare, NOT CUT IT.

Everyone here is standing united to send a clear message to the President and members of Congress who are intent upon dismantling the Affordable Care Act, Medicare, and Medicaid, as well as those who are complicit with their silence such as Governor Hogan.

It is time to move forward. We are going on offense. Healthcare should not just be deemed affordable, and cannot be understood only as coverage. Just one year ago, the concept of guaranteed healthcare for all was dismissed by many as utopian, unobtainable, as pie in the sky. The United States must join the supermajority of industrialized nations globally. Truly equitable healthcare must transcend the progress made from the Affordable Care Act to universal, publicly funded healthcare for all, in the form of a single payer, Expanded and Improved Medicare for All system.