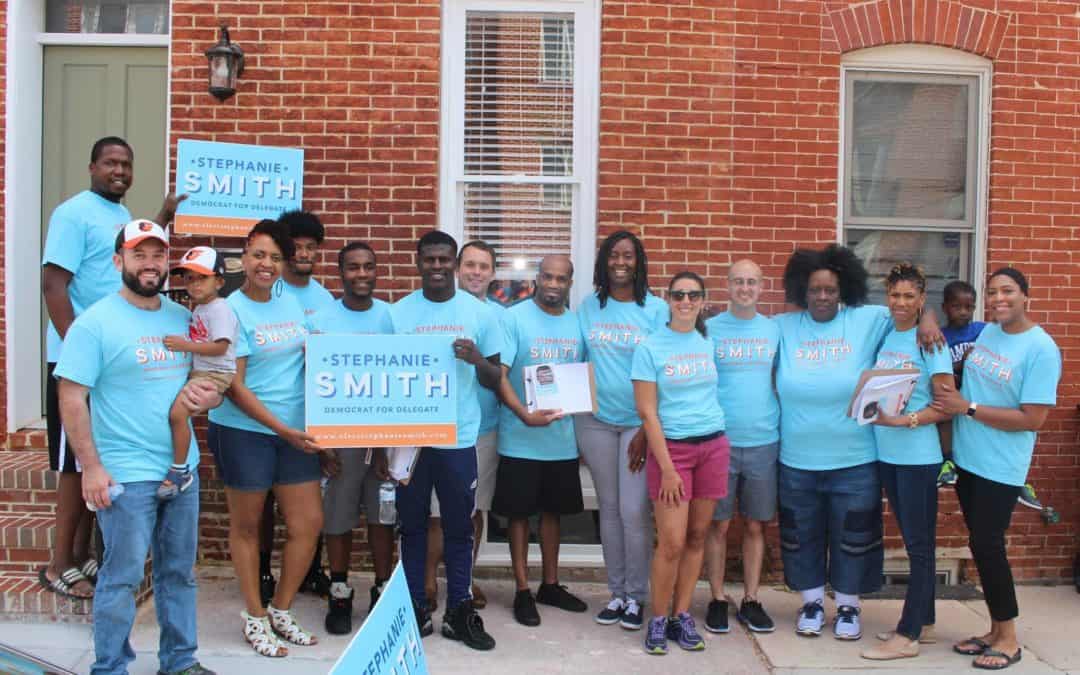 Progressive Maryland campaigned hard for new Del. Stephanie Smith of Baltimore City, and here she talks with Progressive Breakfast about the importance of co-governing -- the work that community activists must do between elections and between legislative sessions to build the kind of power that will pay off in better, more responsive public officials and better community co-governing with them, day by day.

We all want a new President – but at People’s Action, we know it will take a lot more than one candidate at the top to turn this country around. That’s why we’re recruiting and training more than 500 grassroots community leaders to run for elected office at every level of government, who will co-govern to advance the values and goals in our People’s Platform.

Delegate Stephanie Smith is one of our champions. This attorney, mother of two, urban planner and AmeriCorps/VISTA alumna was elected last November to represent Baltimore City’s 45th State Legislative District, as a first-time candidate, endorsed by Progressive Maryland, a People’s Action member group.

Delegate Smith just wrapped up an action-packed first session in the House of Delegates, in which she passed laws to improve the performance of the Baltimore Police Department, create homeownership opportunities for low-income city workers, and expand free tax preparation. OurFuture’s Leigh Friedman caught up with Smith to see how things are going.

Del. Smith’s emphasis, we see here, is on co-governing. Build power between General Assembly sessions so you, the active citizen, can have maximum effect during the session. Don’t elect and turn away; elect and keep building power. This is the first in a series of weekly spotlights at OurFuture about co-governing with elected officials. To read more about this work, click here.

/By Leigh Friedman <> Progressive Breakfast/ Q: How did your first legislative session as a Delegate go? Was the job what you thought it would be? 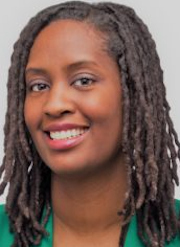 Del. Stephanie Smith: In the past, I’ve been the staffer to an elected official (as a Congressional Black Caucus Foundation Fellow), so being in the foreground was different for me. But I had a great support system in my staff – my chief of staff is fantastic – and in my family.

The Tuesday after Election Day, I gave birth to my second son, and began the session in a way I never thought I would: I endured a pinched nerve in delivery and couldn’t walk, so I began session in a walker.

Navigating a new space while having that additional challenge gave me another connection point to people that I represent: they include people facing physical challenges, and financial challenges, and things like that. It made the work even more urgent for me.

This session, I introduced seven bills, and four of them became law. One passed the House of Delegates, but did not, unfortunately, get a vote in the Senate – but we’ll be right back at it next session.

I learned it’s great to get laws passed, but you can make a difference in other ways. I introduced a bill that I had to withdraw, but the situation pushed me to figure out how to address that issue from a different policy angle. It started a conversation that wasn’t otherwise happening. It’s gratifying to know that I was able to get work done no matter what my challenges were.

Because I worked in the federal policy space as a lobbyist in the nonprofit sector in the past (for Earthjustice, the nation’s largest nonprofit environmental law firm), I’m used to a pace of change that is close to glacial (Laughs).

The state-level is not super fast, but by comparison, it can almost feel that way! You only have 90 days. It underscored how challenging it is to do substantive work under such a tight timeline.

I think also about accessibility. There are not multiple layers of staff in the state legislature. Constituents said things like, “Oh! I’m surprised I’m actually talking to you!” I think that’s hugely awesome for democracy. People should have that sense of touch with their representatives. A regular person sharing their idea can become something tangible, which is only a remote possibility in the federal space. That’s what makes state and local politics so exciting: there’s access to decision-makers, which lends itself to constituents giving input on what happens.

Q: How have you involved community members and organizations in your work in the Maryland state legislature?

One of the bills I worked on was a local bill that had been introduced unsuccessfully in the past. It was a good piece of legislation and I wanted to get it across the finish line. The bill empowers the City of Baltimore to provide a home buyers tax credit to city employees who are in the bottom quartile of the pay scale, roughly $40,000 or less in annual salary.  In a lot of cities, you might think, “How could someone with that income even buy a home?”

If you’re familiar with Baltimore, you know that many homes are not inhabited right now but are actually in good shape, so they’re less expensive than they would be in D.C., for example. Baltimore one of the last areas where a working-class person can buy a home, yet we noticed that only 35% of low-income city employees owned homes. That’s a lower rate than people higher on the pay scale.

It was really important to partner with the City Union of Baltimore (CUB), because they represent the workers [who would be eligible for the tax credit]. We worked together to figure out how the City of Baltimore could position CUB members to buy a house: financial education, improving credit, all of those nuts and bolts that allow you to even buy a home in the first place. Sometimes we forget that there’s a longer path people need to be on to utilize whatever policy change you conjure up.

It was really exciting to work with the union representatives. When they explained to my colleagues what buying a home means to their members, it was so much more powerful than any data points could have been because it was real. These are real workers, people who already live in our city.

While many things are being done to entice people to come to Baltimore, I think it’s also really important to put the flag in the ground, appreciate the people who are already here, and help them to have an even bigger stake in the community that they already live in.

Q: How can grassroots organizers work with state legislatures to win on their issues?

You have to have a story, but you also have to have data to back it up. Sometimes, people have one or the other, but the more that you have a marriage between a powerful story and the data, that’s an unbeatable combination. Personally, I’m not moved to make policy by anecdote, but I would never discount the power of storytelling.

People often write emails (to legislators). I think that has value. But, as much as some people don’t want to hear this, reaching out to legislators on social media just adds more transparency to your effort. That is very different than an email that goes into the ether. The more that you can target your message toward your legislator online, the more you put a spotlight on them and on the issue.

Here’s the biggest thing that I would impress on anyone who wants to weigh in with a state legislature: because so many [state legislatures] are part-time, the most important time to interact with representatives is actually between sessions, not during session. You should really work with that elected during the interim period to share your ideas, get a bill drawn up, and work out the kinks. A lot of that thoughtfulness is impossible to perform during session, so I caution people to not wait until the session starts to engage. Reaching out as early as possible also allows you to educate that elected if you feel it’s necessary to get them to be more active on your issue.

Q: What advice would you give to grassroots activists who are considering running for an office like yours?

I can only speak for me, but I don’t like to wing it. I like to really know what I’m doing [before I start]. When someone I admire told me to consider running, I was like, “I feel like I need to prepare for this opportunity to even know if it’s something that I should do.”

The first thing that I did was check if my family would be supportive. If I wasn’t going to have support from family, there was no point. This is a long journey, and I already had one small child at the time.

A few months later, I was told about a program called Emerge that trains Democratic women to run for public office. It’s a national program and I participated in Emerge Maryland; it’s roughly a 6-month program. For me, it was like, “If I have family support, if I get into Emerge, then maybe I have what it takes to run.” Both of those things happened and that’s when I realized, “Okay, I’m in this for real.”

The barrier to entry is very low – there’s a certain age threshold, and you fill out a form, so it can be easy to get on the ballot or enter a campaign. The hard part is having the discipline to make sure that you win.

Whether it’s Wellstone, Emerge or other local projects that focus on getting people to run for office (Editor’s note: People’s Action and its member groups also host candidate trainings around the country), I just encourage people to see what is available to them, what they can afford.

Even though young people may not be old enough to vote, they can still affect change around policy. For example, we had Baltimore City high school students who interned at the Office of Sustainability. They formed an organization around a Foam Free Baltimore, and their advocacy led the City to ban styrofoam. Their leadership led to the state to ban styrofoam this session.

So before they were even able to vote, they already led a statewide effort. They might not always get the credit or the spotlight that they deserve because oftentimes were more focused on who introduced the bill.

If you have identified a problem in your community that you feel can be addressed through public policy, you do not have to wait to share it, to lift it up, or to make a campaign around it. I honestly think that one of the beautiful things about social media is that it has democratized communication. If you didn’t have money for signs or billboards, which is how you would get the word out once upon a time, you can [use social media].

You don’t need to have a certain type of education or other credentials. You have value because of your experience in your community, in a job, or in a system. It doesn’t matter that you aren’t the CEO, you still have a vantage point for diagnosis and you should give input.

I encourage anyone who cares about their family, their block, their community, their city, their state to feel like their voice is valuable because it’s going to take all of us participating in civic life and working together to solve problems. Don’t count yourself out.