Denying students' right to organize, Georgetown U. "betraying its obligation"

Georgetown University "opposes the unionization efforts of its advanced degree candidates who are working as research and teaching assistants .. , Georgetown is betraying its obligation as a Catholic and Jesuit institution to workers and the less affluent." Hal Ginsberg analyzes Georgetown's opposition to seeing its students as working people.

/By Hal Ginsberg/ As a 1990 graduate of Georgetown’s law school and the father of a current undergrad, I was disappointed to read that the university opposes the unionization efforts of its advanced degree candidates who are working as research and teaching assistants [Metro Dec 7]. Georgetown contends that the assistants are primarily students whose work is in furtherance of their own education. But this rationale seems shaky at best. Even more problematically, Georgetown is betraying its obligation as a Catholic and Jesuit institution to workers and the less affluent.

Georgetown insists that helping professors with research and teaching undergraduate classes are “experiences” that form “part of the comprehensive education it provides to graduate students.” But, the university does not require these often onerous and modestly compensated experiences of all graduate students. Instead, assistants are chosen from those who apply – often out of financial need. If helping professors do their jobs were indeed an essential aspect of a Georgetown graduate education, then it would be mandatory. 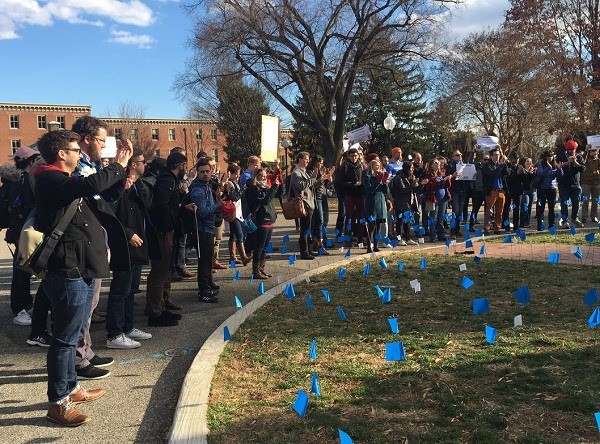 Georgetown is hardly the only school that is taking a hard line with its research and teaching assistants. Unlike the secular Ivies, however, Georgetown touts its Catholic and Jesuit nature as critical to its academic atmosphere: “The Church’s commitment to social justice and the Jesuit mission to create leaders in the service of others underscore many intellectual and spiritual pursuits at the university.” Recent popes, Leo XIII in the Rerum Novarum published in 1891 and, 90 years later, John Paul II in Laborem Exercens, have voiced unequivocal support for the right of working people to unionize. “Catholic social teaching,” John Paul II wrote, holds unions to be “a mouthpiece for the

struggle for social justice, for the just rights of working people in accordance with their individual professions[.]”

Georgetown may argue that, regardless of Catholic doctrine, it lacks as sizable an endowment as other elite schools and therefore cannot afford the increased compensation that graduate students would demand if they negotiated collectively. To the extent that this is true, perhaps the school could try to renegotiate the reported $4 million salary it is paying first-year basketball coach Patrick Ewing for services tangentially –at most -- related to the school’s express purpose, which is to provide a forum for “academic discourse and spiritual enrichment.” In any event, the university has a duty to follow both secular and canon law and therefore to back its working graduate students who are seeking the right to bargain collectively.

Ginsberg is a Montgomery County activist and frequent blogger on the PM BlogSpace. This is a longer version of a letter to the editor of the Washington Post that appeared in a featured position on Dec. 12.