Dr. King for the ages -- then and now 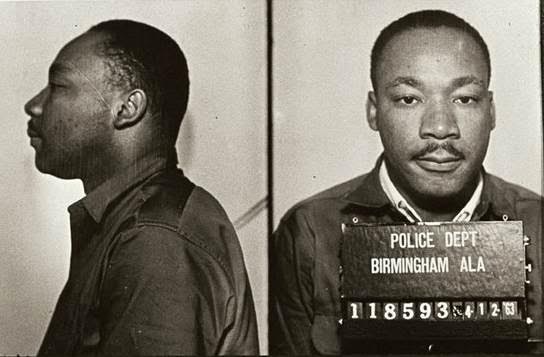 Dr. Martin Luther King Jr., whose revered memory may hit us most sharply today, was one of us.

In his breakthrough 1967 Riverside Church address in which he overtly opposed the Vietnam War, he confessed “Over the past two years, … I have moved to break the betrayal of my own silences”. …  Nor does the human spirit move without great difficulty against all the apathy of conformist thought within one’s own bosom and in the surrounding world. Moreover, when the issues at hand seem as perplexing as they often do in the case of this dreadful conflict, we are always on the verge of being mesmerized by uncertainty.”

We can all be paralyzed by such doubt and fear. Dr. King showed us that a true “revolution of values” requires a radical departure from those concerns. Richard Eskow makes some informed speculations how King’s uncompromising realism would see the challenges since his death in 1968.

/By Richard Eskow <> Progressive Breakfast/ This Monday, the nation celebrates Martin Luther King, Jr. Day. If he hadn’t been murdered, he would be 91 years old. How would Dr. King view today’s activists?

The words to his “I Have a Dream” speech will be repeated from podiums and in classrooms across the country. But many of the people repeating these words have never heard other King quotes, like this one:

“I am convinced that if we are to get on to the right side of the world revolution, we as a nation must undergo a radical revolution of values.”

To those who condemn idealism, who preach the quiet cynicism of self-limiting “pragmatism” and insist it’s “how the world works,” Dr. King had an answer: He was, in his own words, “maladjusted.”

In a 1963 speech at Western Michigan University, he said:

But in a day when sputniks and explorers are dashing through outer space and guided ballistic missiles are carving highways of death through the stratosphere, no nation can win a war. It is no longer the choice between violence and nonviolence. It is either nonviolence or nonexistence…

Dr. King also said: “This is no time to engage in the luxury of cooling off or to take the tranquilizing drug of gradualism. Now is the time to make real the promises of democracy.”

“We must… realize,” he continued, “that the problems of racial injustice and economic injustice cannot be solved without a radical redistribution of political and economic power.”

In other words, Dr. King was a radical.

A few years ago, invocations of Dr. King’s radical spirit were hard to find. They’re more common today, but even the best-intentioned of these pieces tend to place his radicalism in the past tense. That’s a mistake. Dr. King is gone, but his ideals live on.

We can never be sure how Dr. King might view current events, but he can still guide us through his rich record of words and deeds.

Here are six ways that the revolutionary spirit of Dr. King lives on.

Nonviolent direct action seeks to create such a crisis and foster such a tension that a community which has constantly refused to negotiate is forced to confront the issue. It seeks so to dramatize the issue that it can no longer be ignored … there is a type of constructive, nonviolent tension which is necessary for growth.
– Letter From a Birmingham Jail, 1963

Some politicians who invoke Dr. King this holiday will try to reduce his memory to an emoji they can paste onto their platitudes. But Dr. King was a troublemaker, in the best sense of the word. He knew what it meant to create tension, and discomfort, and disharmony.

While he lived, Dr. King was the target of almost unimaginable hatred and condemnation. It rained down on him from the streets of Southern towns and the corridors of FBI headquarters, from the boardrooms of bus companies and the booths of Boston diners.

Dr. King preached communication, but experienced excommunication – from that cozy world of ‘insiders’ who may argue but will never risk their lives or careers for higher ideals.

Would Dr. King have supported the actions of NFL protesters and movements like Black Lives Matter? It’s hard to imagine otherwise. Their actions make some people uncomfortable, but he wouldn’t have been bothered by that. Protests, he wrote, “merely bring to the surface the hidden tension that is already alive.”

The attacks on BLM protesters and the blackballing of Colin Kaepernick would feel very familiar to Dr. King and his associates. It’s impossible to believe he would not see their struggle as his own.

As for their motivations, Dr. King said this in his “I Have a Dream” speech: “There are those who are asking the devotees of civil rights, ‘When will you be satisfied?’ We can never be satisfied as long as the Negro is the victim of the unspeakable horrors of police brutality.”

The Struggle for Economic Justice

“Call it democracy, or call it democratic socialism, but there must be a better distribution of wealth within this country for all God’s children.”
– Negro American Labor Council, 1961

King’s spirit also lives on in the movement for economic justice.

A 2014 Princeton study which has since been validated confirms that the United States has become an oligarchy, for all intents and purposes.  Multinational corporations are dictating the rules of employment and trade. The ultra-rich accumulate more and more of our national wealth and income, as the middle class dies and 40 million Americans – including one out of every five children – lives in poverty.

Corporations seek to inoculate themselves from being held accountable by promoting what they call “corporate social responsibility.”  A few people may be helped, but these programs are little more than coins flung at beggars.

Dr. King would probably not be impressed.  He would probably see more of himself in the work of groups like FED UP who are fighting for economic justice.

Dr. King also told the Medical Committee for Human Rights in 1966, “Of all the forms of inequality, injustice in health care is the most shocking and inhumane.”

The provenance of this quote was questioned for years, until attorney and editor Amanda Moore tracked it down and confirmed it.  Dr. King said it less than a year after Medicare was passed into law.

Given what we know of his values, is it unreasonable to believe that Dr. King would stand with those groups that are fighting to ensure that Medicare’s protections are available to every American? And can there be any doubt that he would be committed to expanding Social Security, ensuring decent vacation and family leave benefits for all workers, and taking other steps to expand the social safety net?

The Fight for Workers’ Rights

The two most dynamic and cohesive liberal forces in the country are the labor movement and the Negro freedom movement. Together we can be architects of democracy.”
– Address to the Fourth Constitutional Convention of the AFL-CIO, August 1961

Dr. King’s spirit lives on in the most progressive and transformative elements of the labor movement.

He understood that inequality, “the glaring contrast of poverty and wealth,” could not be defeated without organized labor. Dr. King didn’t hesitate to challenge the labor movement when unions practiced racial discrimination.  But he was a fierce advocate for labor rights. He was in Memphis on behalf of striking sanitation workers, in fact, on that terrible night when bullets took his life.

Dr. King understood that the fight for civil rights was closely connected with the fight for workers’ rights. “Negroes in the United States read this history of labor and find that it mirrors their own experience,” he told the AFL-CIO. “We are confronted by powerful forces, telling us to rely on the goodwill and understanding of those who profit by exploiting us.”

An End to Militarism

“We are called to speak for the weak, for the voiceless, for the victims of our nation, for those it calls ‘enemy,’ for no document from human hands can make these humans any less our brothers.”
– Beyond Vietnam, 1967

His spirit lives in the groups fighting to end our country’s campaign of permanent war, and in the brave men and women who work to end the illegal and immoral practices of our military and intelligence services.

“… when we say Thou shalt not kill, we’re really saying that human life is too sacred to be taken on the battlefields of the world. Man is more than a tiny vagary of whirling electrons or a wisp of smoke from a limitless smoldering.”

He undoubtedly would have opposed the extrajudicial drone killings ordered by our current president and his two predecessors, and the torture campaigns orchestrated by the CIA.

This element of his spirit does not live on amongst the 117 Democratic members of the House, and the  41 Democratic senators, who joined their Republican colleagues in voting for an extravagant $770 billion boost to what was already the largest military budget in human history. They include some people who have been widely characterized as “progressive heroes.”

These politicians stand rebuked by the words Dr. King spoke to the National Labor Leadership Assembly for Peace in 1967:

“A true revolution of values will soon look uneasily on the glaring contrast of poverty and wealth.”
– Beyond Vietnam, 1967

Dr. King’s spirit surely lives on in the recent revival of his Poor People’s Campaign, the project he was focused on at the time of his murder in 1968. This initiative, led by Revs. William Barber and Liz Theoharis, plans a “Poor People’s Assembly and March On Washington” on June 20, 2020,  to protest King’s “triple evils” of racism, poverty and militarism, and ecological devastation. This new campaign describes itself as “A National Call for Moral Revival.”

The original Campaign had a highly progressive economic agenda.  It called for $30 billion to be spent every year on anti-poverty programs. That would amount to roughly $213 billion per year in today’s dollars, or $2.13 trillion over a ten-year period. That may sound astronomical, but it’s not much more than Congress just gave away in tax breaks skewed toward the rich.

King’s Campaign was scheduled to begin with the construction of a shantytown on the national Mall in Washington, DC, followed by a civil disobedience and mass arrests, and concluding with a nationwide boycott of major corporations and shopping areas to pressure business leaders to support its goals.

The original Poor People’s Campaign also called for a program of guaranteed employment and guaranteed income for all Americans, as well as the construction of 500,000 low-cost housing units each year until all slums were eliminated.

Jobs, income and housing for all. King’s vision is as radical and urgent today as it was fifty years ago.  A society dominated by the wealthy, one that has given so much to the few for so long, can surely do this much for the many.

Dr. King’s spirit lives on in the new Poor People’s Campaign, and in every place radicals gather to change the world.

Our only hope today lies in our ability to recapture the revolutionary spirit and go out into a sometimes hostile world declaring eternal hostility to poverty, racism, and militarism.

This is an updated version of a blog OurFuture publishes every year in honor of Dr. King. Richard Eskow is associated with OurFuture, blogs for Progressive Breakfast and is a senior adviser with Social Security Works.