Activists came away from the 2018 session seeing a rollback in enthusiasm and willingness to consolidate gains after an encouraging group of wins in the 2017 session. Pushback from industry, developers and business interests doomed many bills. One bright spot: fully funded state effort for Bay cleanup.

/By Timothy B. Wheeler/Bay Journal/ Maryland lawmakers took action this year to thwart the Trump administration’s move to allow oil and gas exploration off the state’s Atlantic coast, and expanded efforts to take sea level rise into account in planning state-funded projects.

But during the General Assembly session that ended April 9, legislators refused to strengthen the state’s forest conservation law or even study whether more needs to be done to protect woodlands from development. They also balked at getting more energy from renewable sources and banning the use of polystyrene foam food containers statewide.

Those and other defeats in Annapolis outnumbered victories for environmental activists, who saw their priorities voted down – or left untouched on a committee desk.

“It was not the best session we’ve ever had, that’s for sure,” said Karla Raettig, executive director of the Maryland League of Conservation Voters.

The forest conservation defeat was one of the most disheartening. Last year, legislators failed to support a bill that would have required a one-for-one replacement of every tree cut down by developers, so activists pushed this year for protecting “priority” forests, the largest tracts deemed the most ecologically valuable. They pointed to a study finding that, despite the protections offered by the 1991 law, the most heavily forested tracts in Baltimore County continue to be carved up by development.

But developers and local officials continued to object to tightening the law, and the state Department of Natural Resources joined the opposition, contending that — contrary to earlier data — Maryland has gained rather than lost tree canopy and forestland in recent years.

The state Department of Legislative Services had estimated that Maryland has lost more than 450,000 acres of forest since the 1960s, and that before 2008 it was losing up to 8,600 acres each year. But the DNR cited a 2016 federal report estimating that forest loss in Maryland leveled off around 2011 and that forested acreage had actually increased slightly since then.

Environmentalists regrouped and proposed a study to determine the true state of Maryland’s forests and how well the law is working. Days before the end of the session, they thought they’d struck a deal to pass the weakened bill. It passed the House with only about seven hours left in the 90-day session, but never came to a vote in the Senate.

“For the first time I can remember, a bill completely disappeared,” said Alison Prost, Maryland executive director of the Chesapeake Bay Foundation.

Sen. Ron Young, chief sponsor of the forest conservation bill, said he couldn’t find out what had happened to his legislation until about 45 minutes before the Assembly’s scheduled adjournment at midnight. He said he was informed that the Department of Legislative Services, which under the House-amended bill had been tasked with studying the issue, had objected that it lacked the staff and resources to do so. Young said that with time running out to revise the bill or reach an accord with the House, he reluctantly agreed to let it die without a vote. 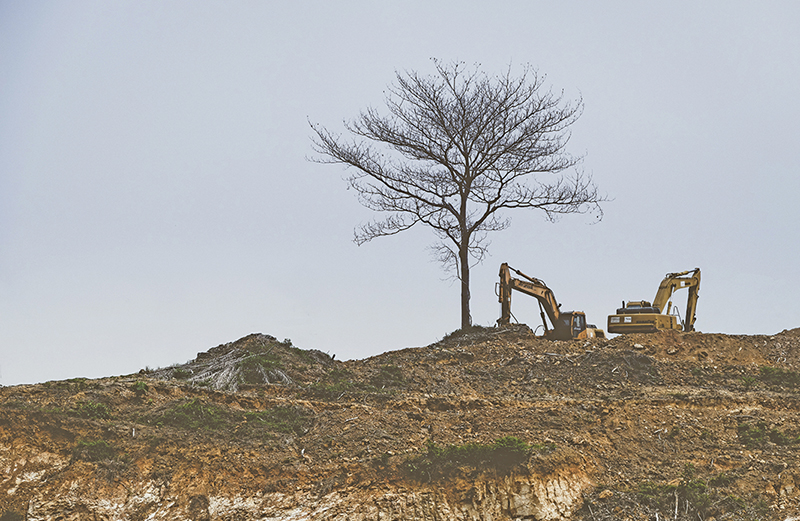 The loss of a bill to protect the state's dwindling forest lands was especially disheartening to environmental activists. Photo: Bay Journal

The Frederick County Democrat said he’s not giving up, though.

“We’ve got to find a way to do it,” he said. “I think the problem is serious, and I think it can be addressed. It’s just a matter of getting people to cooperate.”

Another proposed study — to determine if air pollution from large-scale animal farms poses health risks — failed to even get out of committee.

The bill, proposed for a second year by Sen. Richard Madaleno, a Montgomery County Democrat, would have required the state Department of the Environment to monitor air emissions around “concentrated animal feeding operations” and determine if they pose hazards to workers and downwind residents.

Though supported by some environmentalists and a group of citizens living near poultry houses on the Eastern Shore, the measure faced stiff opposition from the Maryland Farm Bureau and the poultry industry, which argued that the U.S. Environmental Protection Agency has been studying the issue for some time.

Legislation to ban the use of polystyrene foam food containers fell short again for the second straight year as well, a major disappointment to environmentalists concerned about litter and nonrecyclable waste. A bill to prohibit the use in Maryland of the pesticide chlorpyrifos — which the EPA had proposed banning until the Trump administration reversed it — also faltered. So did measures that would have boosted Maryland’s renewable energy goal from 25 percent by 2020 to 50 percent by 2030, or to 100 percent renewables by 2035.

Environmentalists did see some bright spots. Lawmakers approved the expansion of a state law requiring that sea level rise be taken into account in planning state-funded roads, buildings and other projects. It also called for the state to weigh what can be done to mitigate the loss of farmland and drinking water supplies to saltwater intrusion, and for communities to develop plans for dealing with frequent “nuisance” flooding.

“While the state has been forward-thinking on climate change in a number of respects, we’re not doing nearly enough to plan for the big impact sea level rise will have on the low-lying areas of the state,” said Del. Dana Stein, a Baltimore County Democrat who sponsored the legislation along with Sen. Paul Pinsky, a Prince George’s County Democrat. Activists also had some success playing defense, beating back a bill that would have killed offshore wind projects along Maryland’s Atlantic coast.  They supported another bill aimed at thwarting the Trump administration’s move to open the Atlantic coast to offshore oil and gas drilling; lawmakers voted to impose strict liability for any pollution or other damages that might result.

Some wins more directly affect the Chesapeake Bay. Gov. Larry Hogan, for example, fully funded Maryland’s portion of the Bay cleanup effort in his budget, which was adopted by the legislature.

“That’s a positive,” Prost said, in contrast to past fights over cuts and shifts in Bay-related funding. “It means [pollution control] practices will stay on the ground, [including] wastewater treatment plant upgrades [and] farm conservation. We have the funds to stay the course.”

Lawmakers also passed a bill offering financial help to homeowners to pump out their septic systems and encouraging localities to develop plans for maintaining those household waste treatment systems. But the bill’s chief sponsor, Del. Stephen Lafferty, a Baltimore County Democrat, failed to persuade his colleagues to pass two other measures aimed at requiring septic systems that pollute less — but cost more  — near high-quality streams or for existing homes sold near the Bay and its tidal tributaries.

“There’s still a reluctance to acknowledge the need for improved technologies to remove nitrogen upstream, as it were,” Lafferty said.

The outcome of this year’s legislative session contrasts with last year’s, when environmentalists celebrated the passage of a statewide ban on hydraulic fracturing or “fracking” for natural gas. Raettig attributed it to looming state and federal elections. She suggested delegates and senators were reluctant to pass anything that an opponent might allege has cost taxpayers money.

“I think the specter of the ‘rain tax’ is still over us,” Raettig said, referring to the furor four years ago over legislation that imposed stormwater management fees on property owners in the state’s largest localities. Hogan campaigned in 2014 on a pledge to repeal the fees, and once elected succeeded in making them a local option.

Despite this year’s disappointments, Raettig said environmentalists would keep pressing on their priorities, and she predicted they would be on voters’ minds in the coming elections.

“I expect there are a lot of questions elected officials are going to have to answer when they go home,” she said.

This article appeared in the Bay Journal April 13