Five reasons not to get sucked into the 2020 election now

Democratic candidates are beginning to cascade into the 2020 presidential race at an accelerating pace. On New Year's Eve Sen. Elizabeth Warren was the latest to form an "exploratory committee" and others will doubtless do so soon, for visibility and fund-raising reasons. Lower Shore Progressive Caucus chair Jared Schablein ticks off the reasons that getting caught up in the madness too soon means we will be taking our eyes off the prize locally, where important work needs to be done and where local politicians are hoping you will not watch them too closely. He speaks for the Lower Shore but every jurisdiction in Maryland should take heed.

/By Jared Schablein/ Here are “Five Reasons we should avoid getting sucked into the 2020 Presidential election right now.”

First: I know we all want to get rid of Donald Trump. I do as well. But the first debate isn’t till June or July of next year, and the primary in Maryland isn’t until April 28, 2020. There are several big events coming up before that we need to focus on.

Second: 2020 is being used as a way to divide people and we have already seen it. 2019 is a time where we need to be united and focused on the Legislative session that starts Jan. 9 and the local elections that will be taking place across the Shore and state through 2019. (These are important races happening right in your town/city and are often overlooked.)

Third: Our Delegation on the Lower Shore is banking on you arguing on 2020 and not focusing on what they are doing/ what is going on in Annapolis. Let’s be honest; our delegation has been able to vote poorly for a very long time because the community isn’t keeping up with what they are doing. Also, a majority of our delegation won’t support a lot of things we want to do unless we are organizing the community to pressure them to do it. 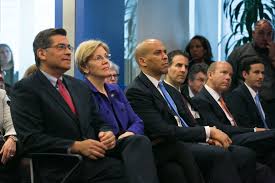 Fourth: Let’s be honest also: We aren’t ready for 2020 here on the Lower Shore right now. 2018 was a start where we were able to gain some local seats. But, every statewide race beside Sample-Hughes’ District was a loss. We need to use 2019 to build, not argue, or we could very much see the same thing happen in 2020 and 2022.

Fifth: A lot of people just want to see Donald Trump lose in 2020 right now. But ripping the Democratic primary field apart right now will turn more people off towards your preferred candidate than get them to jump on board.
There is plenty of time during the primary to convince people to join your side, and you can't do that if you have already pushed them away in early 2019.

Warren in; Booker next?

Jared Schablein is chair of the Lower Shore Progressive Caucus