Food insecurity a signal of wider distortions in public policy

Well-intentioned proposals to reduce "food deserts" in Prince George's tiptoe around the wider inequity that brings on the county’s food security issues – residential segregation, not only by race any more but class, exacerbated by high-profit development that steadily erodes affordability of quality housing and isolates those communities further. A UMCP student's op-ed in the student newspaper highlights these effects, even in booming College Park.

/By Woody Woodruff <> PM BlogSpace Report/ As in many poorly planned and economically exploited neighborhoods throughout Maryland, the inside-the-Beltway portion of Prince George’s County suffers from poor access to healthy food – a contributor to the county’s generally low level of health. A Maryland National Capital Park and Planning study published in 2015 summarized:

“ The residents of Prince George’s County still face challenges in accessing healthy food, evidenced by the considerable number of residents who are food insecure, the rapidly increasing number of overweight and obese residents, and the many Prince Georgians who are dying from diet-related chronic diseases every year.”

The 2017 study noted “Maryland is the wealthiest state in the country, but there are many Marylanders who are food insecure, of which 17 percent live in Prince George’s County. Food insecurity is a serious problem in the County: -- One in seven people in the County is food insecure.”

The MNCPP study has laudable proposals for increasing access to healthy, fresh food in neighborhoods that are stranded in “food deserts” – promoting healthy foods in smaller stores of sub-supermarket size, urban farming etc. The county’s Food Equity Council has kept these and other useful strategies in the public eye.

But all these well-intentioned proposals tiptoe around the wider inequity that brings on the county’s food security issues – residential segregation, not only by race any more but class, exacerbated by high-profit development that steadily erodes affordability of quality housing and isolates those communities further. 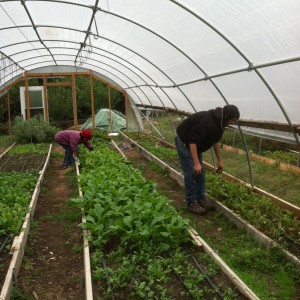 A startling finding in the 2015 MNCPP study spotlights that factor: “There are more than enough supermarkets in the study area; in fact, there are 20 more supermarkets than this market would normally support. Therefore, opening new supermarkets may not solve the problem.” And that was in 2015. The supermarkets are concentrated in affluent areas with growing density of high-profit gentrified housing. In turn, many of the county’s poorer neighborhoods, where residential development would yield little profit, suffer food insecurity (as well as the other impacts that inevitably accompany this structural inequality).

While food deserts (a term the MNCPP study finds unhelpful) nevertheless afflict residents of many communities, county government has sought to balance its tax base with more commercial development to placate its perennially restive residential taxpayers, who cling to the TRIM tax cap as a bulwark against high-cost government.

That has made many County Council members, indirectly beholden to developer cash through their participation in legislative electoral slates, ready to embrace any high-value commercial proposals regardless of where they are located.  Such commercial proposals then drive further residential gentrification and leave poorer communities further isolated from healthy food and from much, much more that they need. So TRIM actually drives poor planning and raises the future cost of catching up to a poorly funded school system and lagging transit and community facilities.

The role of profit-driven development and redevelopment in this process is highlighted in what many Prince Georgians would think an unlikely locale – College Park, the booming town surrounding the booming University of Maryland flagship campus.

In an op-ed Nov. 16 in the student newspaper The Diamondback, student writer Sona Chaudhary nails the underlying impulse that’s affecting the lives of students: “College Park has prioritized profitability and expansion” over the needs of students and residents, in a “clunky incorporation of elements of large cities that scrub out the comforts of suburbia.

“While the University of Maryland enrolls increasing numbers of students, the city continues to gain people and businesses continue to be established. We live amid this growth in a state of constant construction without getting the infrastructure of a real city,” Chaudhary observed.

Titled “College Park’s poorly planned growth has driven out its small city benefits,” the student’s analysis indicates “Instead of supporting the growth of local businesses and being responsive to the needs of low-mobility residents, College Park has prioritized profitability and expansion. By bringing in popular chains and pushing for more upscale venues, the city has neglected to build the foundations for an established community.”

“College Park has adopted high real estate prices without trying to mitigate them,” Chaudhary notes, in a nutshell describing the overall profit-embracing approach as well of the county government that not only exacerbates food desertification and insecurity but isolates communities by housing quality, quality of public services, availability of decent-paying jobs and – eventually – affordability, with a high exit rate to housing insecurity and homelessness.

Food insecurity may decline somewhat with the introduction of urban farming and neighborhood outlets where fresh, healthy food is made available with public support. But it will be temporary as long as the larger inequalities that separate affluent parts of the county from its impacted communities persist in the midst of self-congratulatory government announcements of another National Harbor or Wegmans.

Chaudhary’s coda could stand for where Prince George’s is now stuck by its own political culture: “College Park's progress toward being a true metropole has been piecemeal and unbeautiful. It now exists in this weird middle state where it's lost the benefits of being a small town without having the variety and culture of an established city. We've got the rats and unaffordable living spaces of big urban centers, but it was poor planning that we ended up at this point.”