Gauntlet thrown as Senate GOP says "what insurrection?" on Jan. 6 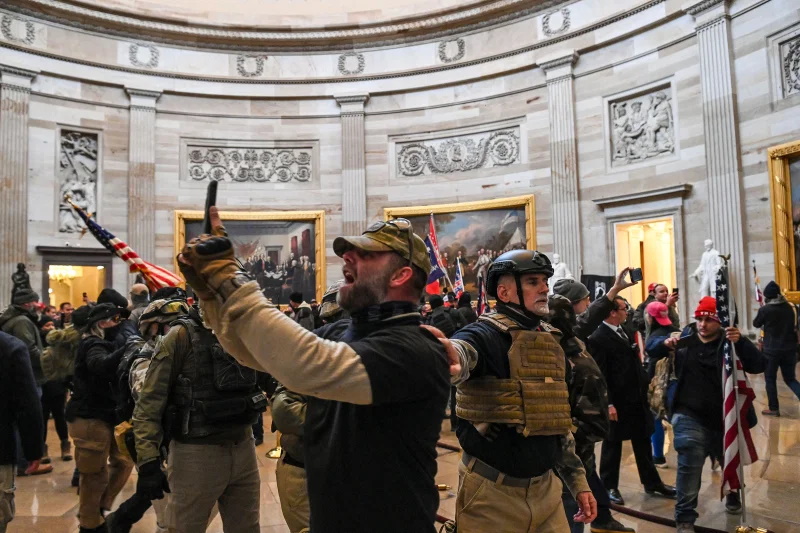 The Senate GOP late last week bowed to the bidding of Mitch McConnell (and Trump) and blocked a bipartisan panel to seek the full story of the infamous insurrection at the US Capitol. That outrageous refusal to face facts fits into the larger right-wing plan to gain and hold power at the expense  of  democracy -- a plan outlined in the PM BlogSpace last week by analyst Sean Dobson. Here's a recap of that deep-diving, four-part series on "The Once and Future Takeover."

It's clear that the best path to a solid account of the January 6 coup attempt by Trump -- one that would be persuasive for many doubters -- would have been the bipartisan commission blocked last week by the Senate GOP. But the coup attempt was only one aspect of the GOP/rightwing project to sidestep democratic processes in a relentless reach for raw power. Our series "The Once and Future Takeover" outlined and detailed that project -- and how to stop it and preserve democracy.

The complete essay may be read at https://seandobsonprogressive.wordpress.com/category/blog/

The Once and Future Takeover

The right-wingers at the core of today’s GOP demonstrated January 6, 2021 that they have no interest in American democracy if it interferes with their goal: political, financial and cultural dominance of this nation. In this deep-diving essay, Maryland progressive leader and analyst Sean Dobson shows how close this frothing minority came – and could come, in the future – to overcoming the democratic processes that we are used to thinking of as normal elections. Donald Trump was the clear perpetrator of the attack on the Capitol and Congress in January but the sentiments and strategies of the Republican right predated him and will be rehabbed by his clumsy failure. A next round could succeed in upending democratic electoral processes by targeting their dangerously fragile 18th-century roots with 21st-century strategies, as Dobson -- board chair of Progressive Maryland -- shows here. In the first of four parts we see how Trump’s and Trumpism’s assaults on the election before, during and after Election Day, imperfect as they were, nearly succeeded in undoing the majority rule on which our process is grounded. A coup has failed, for now; a future one has better chances unless understood and fought against.

Here is a link to the first installment, published Tuesday, May 24.  The complete essay may be read at https://seandobsonprogressive.wordpress.com/category/blog/

The Once and Future Takeover II

In the second of four parts, analyst Sean Dobson outlines the weaknesses in our ageing constitutional system that could be exploited by right-wing zealots, especially elected Republicans in federal and state office. Existing strategies of voter suppression and partisan gerrymandering (the GOP is much better at the latter) will combine with further attacks on the judicial system, top to bottom, as well as internal party attacks to remove GOP officials who remained loyal to the democratic electoral system, as Dobson, who is board chair of Progressive Maryland. Further, the already-flawed Electoral College system is further open to exploitation by GOP state legislators. Each part of the strategy is well known to be vulnerable to manipulation but, added up, the dangers this poses to democratic process are truly alarming and will need to be addressed.

Here is a link to the second installment, published Thursday, May 26.

The Once and Future Takeover III

In the first two parts of analyst Sean Dobson’s account this week, we have seen the shape of the failed Trump coup in 2020 and the many flaws in our electoral system that could be far more exploited by an organized post-Trump white-supremacist GOP rightwing core at the next opportunity. What are the ways that pro-democracy forces could contest those strategies – not only the obvious ones that happen before, during and even after Election Day but the less-visible vulnerabilities that require legislative and executive action sooner rather than later?

In the third of four parts, Dobson -- Progressive Maryland's board chair and a progressive historian of modern politics -- the activist path is laid out that will be required to mount the best defense against a likely more coherent GOP takeover attempt. Keeping police and the military neutral and militias weak are critical tasks, as is reining in the unchecked power of social media and the Russian trolls who surf it. As we find, “Nothing in the US Constitution or federal law specifically mandates that the President be popularly elected” and that leaves the field open for a lot of GOP mischief that must be fixed legislatively.

Here is how the fixes can be accomplished.

Here is a link to the third installment, published Friday, May 28

The Once and Future Takeover IV

We have seen in this week’s deep exploration of the GOP right wing’s strategies – taking advantage of resentments among the former culturally dominant but now dwindling white working class, finding weaknesses in the US’s antiquated system to reverse electoral outcomes at the state and federal level – that only an informed and active pro-democracy movement can protect our future elections by making executive, legislative, behavioral and other changes at every level.

Analyst Sean Dobson, who is board chair of Progressive Maryland, outlines the surprisingly broad agenda – both difficult and energizing – that progressives and their pro-democracy allies must tackle NOW to ward off a right-wing takeover of government that, if not fought early, could be very difficult to reverse and result in a permanently authoritarian nation.

Pro-democracy forces "need to truly and massively deliver to the working class – white, black, and brown -- in a way that tangibly hoists median living standards. The obvious need to jump-start the economy, fight climate change, and invest in (green) infrastructure offers historic opportunity to do so – but only if Democrats finally act on their professed principles and ignore their big campaign donors."

Here is a link to the final installment, published Saturday, May 29

The complete essay may be read at https://seandobsonprogressive.wordpress.com/category/blog/