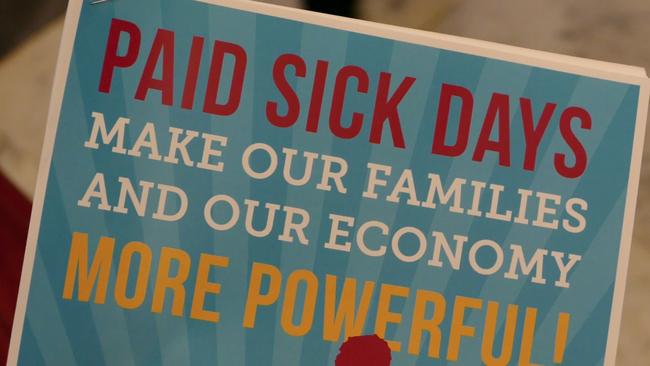 Gov. Larry Hogan's business-friendly paid sick leave proposal Wednesday brought strong pushback and will likely mean a stronger coalition for a bill in January that will actually help low-wage workers faced with the need to go to work sick, or lose their jobs.

/By Woody Woodruff/ The pent-up surge of popular and legislative interest in a humane paid sick leave policy embedded in law for the 700,000 Maryland workers currently without that opportunity has brought an ineffective, business-favoring proposal from Gov. Larry Hogan.

His hope that a bad proposal will weaken support for a solid paid sick leave law is likely to backfire when in January the Assembly begins work – for the fifth consecutive year – on a paid sick leave policy. Success in 2017 would deliver relief to many workers who now have little choice but to go to work sick – or send their children to school sick – in order to keep their low-paid jobs.

A coalition of pro-worker and pro-family groups including Progressive Maryland has worked for half a decade to put a humane paid sick leave policy into law.

Hogan, who claims to be a non-Trump Republican, is nonetheless trading on GOP hopes that the stark reality of a Trump administration will make progressives accepting of anything less than the worst imaginable. Progressive Marylanders know better, deserve better and demand better than a weak paid sick leave proposal that affects only employees of larger companies (50 employees or more). Left uncovered are many of those most pressured by their small-business employers to work sick or lose money in their paychecks, including part-time and seasonal workers.

Elisabeth Sachs of the Job Opportunities Task Force, one of the lead organizations in the progressive coalition, said Hogan’s proposal “would cover far too few workers across Maryland,” the WaPo reported. Proponents of the bill in the 2016 session said coverage set at a 50-employee level would cover more than 120,000 fewer workers than would the progressive bill’s floor of 15 employees.

Hogan’s plan would, as well, throttle better plans already in place, like those in Montgomery County, as pointed out by council member Tom Hucker.

MoCo residents will recognize kindred tactics for toadying to business, exemplified by their new Council president Roger Berliner’s delay of the $15 minimum wage bill – originally scheduled for Council action next week, with majority support – for further “study.” Hogan and Berliner apparently both hope that extra time for business interests to gear up in opposition will weaken the final product. Business, after all, always has more money to dominate the conversation than workers and their organizations.

Progressive Montgomery lead organizer Justin Vest said "This is Trumpism in Maryland. Preemption [by state law] would rob thousands of workers in Montgomery County of a hard-fought victory and deny thousands more who work for mid- or small-size employers much needed protection."

As Hogan and Berliner are likely to find, the opinions of workers and consumers in large numbers will overcome the business cartel’s money advantage.

Hogan’s unveiling of the proposal on the verge of the holiday period was probably the equivalent of a Friday-afternoon data dump, intended as dog whistle mostly for his allies. But the quick reaction from legislators like Finance Committee chair Mac Middleton indicates he is not getting away with his ruse. "This Christmas season, working families are getting a lump of coal," Middleton told the Sun’s Erin Cox.

Veterans of this legislative struggle will file a far better measure in January and Hogan will be presented in April with an unappetizing slice of veto bait – a bill answering the needs of 700,000 Maryland workers, mostly low-income, and their families.