Maryland must act to turn tide on overdose deaths 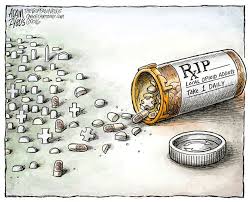 Progressive Maryland today joined the National Council on Alcoholism and Drug Dependence (NCADD) Maryland, Communities United and Baltimore Harm Reduction Coalition to demand that the state, starting with the General Assembly, act quickly and thoroughly to combat the rising tide of overdose deaths in the state. Three bills awaiting action in the Assembly session can make significant progress in saving lives from the overdose epidemic in our communities.

Maryland Must Act to Turn Tide on Overdose Deaths

As CDC Reports Record Number of Overdose Deaths, Advocates and Survivors of the Drug War Call on Maryland General Assembly to Invest in Evidence-Based Harm Reduction Solutions to Save Lives

MARYLAND – Drug overdose deaths in the United States reached an all-time high in 2021. According to provision data from Centers for Disease Control and Prevention (CDC), 105,752 Americans lost their lives to a preventable overdose, a 16 percent increase from 2020. In response to this troubling trend, The National Council on Alcoholism and Drug Dependence (NCADD) Maryland, Communities United, Baltimore Harm Reduction Coalition and Progressive Maryland released today the following statement:

“The latest drug overdose numbers released by the CDC are a dark reminder of how much further we have to go to curb the overdose epidemic and save lives. A preventable overdose took the lives of 105,752 of our friends, neighbors and loved ones in 2021, a 16 percent increase from the previous year. Behind every overdose death is a family and an entire community that grieves while hoping for something better.

“For too long, we have relied on criminalization, over-incarceration and other Drug War-era tactics that have failed to even slow the overdose epidemic and instead are driving preventable deaths to an all-time high. We urge Maryland lawmakers to break from the status quo, abandon the Drug War-era mentality, and invest in evidence-based harm reduction programs that are rooted in public health to save lives.”

In order to address record-breaking drug overdoses in Maryland, NCADD, Communities United, and Progressive Maryland are asking the state to:

Progressive Maryland is a statewide nonprofit advocacy organization promoting racial, social, economic, health and environmental justice. With over 120,000 individual members, supporters, and organizational affiliates statewide, we are leading the fight for progressive change in Maryland through grassroots organizing, public education, and legislative advocacy.

NCADD-Maryland, formed in 1988, is a statewide advocacy organization that provides education, information, help and hope in the fight against chronic, often fatal diseases of alcoholism, drug addiction, and co-occurring mental health disorders. NCADD-Maryland devotes its resources to promoting prevention, intervention, harm reduction, research and treatment of the disease of addiction and is respected as a leader in the field throughout the state.

Founded in 2011, Baltimore Harm Reduction Coalition (BHRC) is a community-based organization that mobilizes community members for the health, dignity, and safety of people targeted by the war on drugs and anti sex-worker policies; we advocate for harm reduction as a part of a broader movement for social justice. We implement public health services and advocate for policies to expand harm reduction in Baltimore and across the state of Maryland. We believe in the value and dignity of all people and that we have a duty to assist in each other’s safety.