Maryland to Alabama, a "secret sauce" for progressive organizing develops 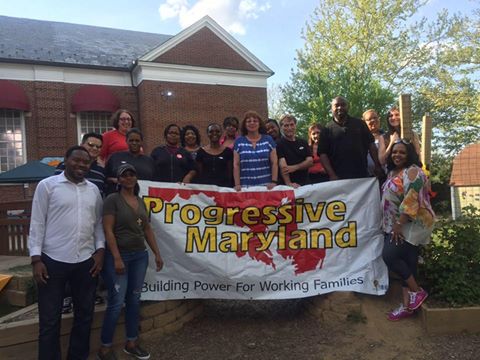 MoCo activists will remember Justin Vest, one of the first organizers in the PMD Montgomery chapter, who relocated his growing family back to his home state of Alabama a few years ago to apply his insights to organizing there. “As Progressive Maryland expanded into more rural areas after 2016,” Vest relates here,  “I started to realize just how similar rural Maryland was to places I knew very well in Alabama.” Leigh Friedman of Progressive Breakfast has the story.

“Montgomery to Montgomery” – our MoCo activists will remember Justin Vest, one of the first organizers in the PMD Montgomery chapter, who relocated his growing family back to his home state of Alabama a few years ago to apply his insights to organizing there. “As Progressive Maryland expanded into more rural areas after 2016,” Vest relates here,  “I started to realize just how similar rural Maryland was to places I knew very well in Alabama.” Leigh Friedman recounts for Progressive Breakfast, the blog of our national affiliate People’s Action, the work Vest and his colleague K.C. Vick are doing to develop a “secret sauce” for organizing in the Deep South.

/By Leigh Friedman<>Progressive Breakfast/ Hometown Action is the youngest and scrappiest member of the People’s Action national grassroots network. Barely two years old, this Alabama grassroots group was on the front page of newspapers around the world when they helped lead protests against the state’s restrictive anti-abortion laws last month.

I traveled to Montgomery to meet with two founding members of Hometown Action: Justin Vest, the group’s Executive Director, and KC Vick, Director of Culture & Power Building, You don’t have to spend much time with Justin and KC to see passion for their home state runs deep.

“I recently met the Alabama State Folklorist, someone who I’ve admired from afar for many years,” KC told me on the muggy afternoon we sat down to talk. Vick grinned, aware they’re one of the few who could pick this obscure figure in state leadership out of a crowd. “I was at a rally where one of our leaders spoke when I saw the folklorist, and I was like, ‘I watch your TV show on public access television! We need you to place young queer Alabamians with folk artists across the state!’”

KC and Justin shared insights like this with me about Hometown Action’s “secret sauce” for building power to win in the Deep South, what outsiders get wrong about the region, and how their approach to organizing, which builds consciousness and relationships through deep conversations, makes a difference and creates impact. (This interview has been edited for length and clarity.)

Justin Vest: The inspiration for Hometown Action really came from my experience growing up in Alexander City here in Alabama. My town had a population of about 14,000. I never particularly liked small town life, and I was thrilled to leave when I had a chance to move to Montevallo to go to college.

Fast forward a number of years, and I found organizing as a staff organizer at Progressive Maryland, another People’s Action 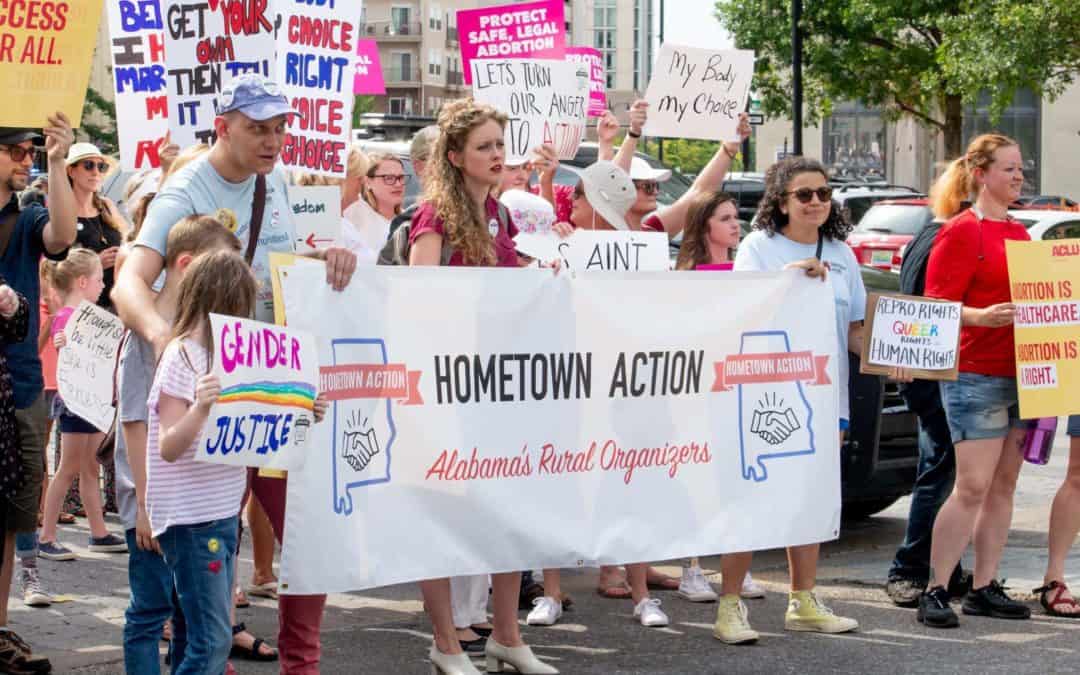 member organization. As Progressive Maryland expanded into more rural areas after 2016, I started to realize just how similar rural Maryland was to places I knew very well in Alabama.

That kind of organizing was different from what was happening in Alabama. I don’t want to give the impression that Alabama is devoid of organizing or progressivism, that’s not at all true. But most folks are engaged in policy advocacy or direct service work, rather than deeply relational grassroots organizing and power building.

I never really lost sight that Alabama is home, and doing that kind of work in Maryland really showed me what was missing here. When our family decided to come back, I was determined to find a way to build, and eventually that turned into Hometown Action. [Vest is at left on the banner pictured, with his children]

K.C. Vick: Almost two years ago, Justin reached out to me on Facebook Messenger. We had never met in real life, but we had been on some calls together about reproductive justice issues.

At the time, I didn’t realize I was an organizer. I think that Justin saw that. From the get-go, I was like, “This is exactly what I’ve been waiting for, I’m ready to go, let’s start figuring out what we’re doing.”

LF: How have you grown?

KV: We definitely expanded our geographic reach: we started in Montevallo and Montgomery, but have grown bases in Auburn, Tuscaloosa—which is my hometown -- Gadsden, and Huntsville.

JV: We started by doing electoral work in the special Senate election in 2017, and we got some attention from that.

Initially, it was difficult to get folks to understand our whole philosophy and framework, which is way bigger than elections or Democratic party politics. We are a community-led and community informed power-building organization, not a Democratic political organization.

At the same time, we found a whole group of people who were not engaged in Democratic politics for a variety of reasons, and our work resonated with those folks. We have a base of over 7,000 folks in the state. 200 volunteers in our first year. Dozens of leaders who have no previous experience organizing, but are ready to learn and lead.

KV: I think we’ve also developed a very different organizing culture in Alabama that I had never experienced here, one outside of Democratic party politics and centered in deep relationality.

I’m really excited about the fact that we’re organizing so many young queer people… It’s really beautiful. It’s like, “That’s the future of Alabama!”

LF: What is Hometown’s secret sauce?

JV: Focusing on rural definitely makes us stand out in the South. Most organizations center their efforts on urban communities by default, and we flip that on its head. We put small towns and rural communities first.

KV: I’d say the organizing culture of People’s Action is part of the secret sauce. The training program in particular. Going to Weeklong Training myself last April, and then watching our leaders go through our local 3-day training here… People really responded to it.

Our progressive community here, like a lot of other places, is constantly reacting. We’ve been thinking a lot about this recently around the abortion ban and reproductive justice. There’s not a lot of time to recoup and plan for the long-term.

Hometown and some other organizations are thinking beyond that: we are in a position where we can envision building real power in Alabama.

JV: The other big thing is that we are focused on winning governing power. We recognize the short-term needs, but we aren’t getting so caught up in putting out every single fire that we lose sight of organizing enough power to change things long-term. That’s our approach to reproductive justice. There are advocates in the state who fundraise for or perform abortions, and we need them — but Hometown Action is doing the long-term movement building that will change the conversation and political landscape around abortion in Alabama for good.

What is missing from or misrepresented in the national conversation about Alabama and the Deep South?

KV: There’s all the stereotyping about Alabama and the Deep South: that whites (here) are all stupid and conservative, and Black folks are all poor, if they’re even mentioned. A lot of people who’ve never been to the South don’t understand that we have a large Black community.

JV: [After the Civil War,] white power structures bred racial division between white sharecroppers and newly freed slaves, because those folks were basically in the same position to take control of a bigger part of the economy. So racism was a device to create division.

All that history gets glossed over and attributed to individuals’ racial bigotry. I want to be clear: it’s not that racism isn’t real and relevant here. It is. But it gets flattened…

We’ve knocked on doors and had thousands of conversations with ordinary people in rural communities all across the state. And no matter where you are or who you talk to, people mention healthcare as a top concern… In minority communities, we hear lots around mass incarceration, police brutality, and the school-to-prison pipeline; we hear about ICE raids in immigrant communities. We believe that communities of color and their self-identified priorities belong at the center of this work.

Everyone likes to point out that Alabama was one of Trump’s best states in 2016. What you don’t hear is that Trump only “won” about 35% of the vote if you look at all eligible voters in the state. That translated to 60-70% of folks who voted, but when you break it down, non-voters were the biggest segment of the electorate.

There is a long, long history of racially biased voter disenfranchisement here in Alabama and the South as a whole, and that continues today. Very much so. But on the flip side,  there’s a whole segment of non-voters who don’t face a lot of barriers to voting, who are, yes, mostly poor white folks.

We’ve found that these folks are mostly disenchanted… They live in, and have been raised in, a culture of conservative politics. The right-wing narrative is dominant because the left has abandoned the South and there has simply been no other competing narrative. They aren’t satisfied with the status quo, but they see no alternative…

KV: I get really upset and very deeply hurt when I see people outside the region looking down on us… Like, “I’m so sorry you’re living in that space where things are so bad and backwards.” It’s so much more complicated than that.

Yes, we have a lot of violence in our communities and our legislature. But there’s powerful organizing happening here. Alabamians have made what they need out of what they have for a long time; we are resourceful, but, in many cases, have been left behind.

LF: Tell me about the Alabama you want for your kids.

KV: I want it to be an Alabama where staying doesn’t feel like a failure. Everyone should have enough resources to make the decision to stay or move elsewhere based on where they want to be and who they want to be… and I want people to feel excited about choosing to stay.

I really want for that child to have a deeper awareness of their history and how things have gotten to where they are now. That’s something that I’ve been denied as a white Alabamian about my own people, and it’s really disorienting.

JV: You know, I want what everyone wants for their kid. It’s not particularly different because we live in Alabama. I want them to have any and every opportunity for a good life, in terms of education and jobs.

The reason I didn’t enjoy [living in rural Alabama] growing up is because I didn’t see myself in the broader community’s values and beliefs… One of my kids is trans. I don’t want her to feel like she has to leave because she doesn’t belong.

JV: Y’all need to invest in the South!

KV: Frankly, we have so much to offer to the People’s Action national network — I’m beginning to realize that more and more. We bring the special sauce of Deep South power organizing! Like… y’all need us! Y’all need us white women and femme folk in Alabama to be voting right if we’re going to move the nation together.

Leigh Friedman is a policy and communications associate at the People’s Action Institute based in Washington DC.This article appeared June 6 in Progressive Breakfast, the blog of People's Action.