There’s a struggle, not a coronation, in store as the state’s Democratic Party chooses its leadership team this Saturday (Dec. 1) in the wake of a decidedly mixed election result. Here's the state of play and the statements by aspirants to the party's chair.

/PM BlogSpace Report/ Alert Maryland progressives probably are aware that there’s a struggle, not a coronation, in store as the state’s Democratic Party chooses its leadership team in the wake of a decidedly mixed election result. Those smarting from the loss of the governor’s race are calling for change; those focused on gains in the Assembly and in major counties see some current leadership successes. By way of the essential state political blog Maryland Matters, the candidates for state chair here have their say about the contested state of affairs – which will be decided in an election Saturday, Dec. 1 in Lanham, Prince George’s County, with members of Democratic Central Committees statewide as the electorate. Other hopefuls for the next Dem leadership are also on the ballot; see below. It is worth noting that there is nothing about this event on either the state Democratic Party website or its Facebook page. 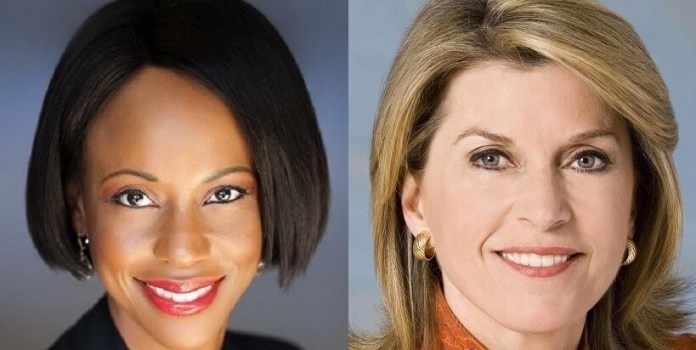 /Published by Maryland Matters November 27, 2018/ Editor’s Note[by Maryland Matters]: The Maryland Democratic Party will choose its new leaders this Saturday. The fight for state chair is between the incumbent, Kathleen Matthews, and Maya Rockeymoore Cummings, a policy consultant. In back-to-back commentaries here, the candidates lay out their platforms. Matthews’ is co-written by Del. Cory V. McCray (D-Baltimore City), a senator-elect who is running for vice chair of the Maryland Democratic Party.

In the best midterm Democratic turnout the nation has seen more than half a century (52 years), with a blue wave carrying Democrats to victory in many down-ballot races, Maryland saw a Republican governor reelected by a double-digit margin. This represents the second consecutive gubernatorial cycle in which Maryland Democrats have failed to secure the governor’s seat because of defections from our own party. Paired with former Gov. Bob Ehrlich’s victory in 2002, Democrats have lost three of the last five gubernatorial elections in Maryland, despite our considerable advantage in party registration.

When Democratic primary voters choose their nominee for the general election, and a faction of Democratic general election voters undermine that choice by casting their lot with Republicans, we are faced with a structural issue that risks fracturing the base and sending the party into further turmoil if it is not resolved. The Democratic Party represents a diverse coalition of stakeholders, but in order to remain a true coalition, we must maintain a united front and improve our organization.

My “Go DEEP” plan would strengthen and expand our coalition, so that we can achieve the statewide electoral success our voters deserve.

My plan is designed with one overarching purpose in mind: to KEEP MARYLAND BLUE. This means not merely defining our values, but adhering to them – and making it clear that the Democratic Party is not an affiliation for political convenience. To be a Democrat is to believe in basic Democratic tenets, and to support candidates who do the same. As a party, we cannot condone breaking with our values, or breaking with candidates who champion those values when doing so becomes difficult.

It means building a new, deeper, more far-reaching infrastructure with liberal use of data analytics to increase efficiencies, more broad-based, low-donor fundraising, and more active grass-roots involvement; not merely at the state level but at the county, city, and district levels. It also means using both digital and social media, as well as more traditional media, to more actively get our message out – not once in a while, but on a semi-weekly basis. We must define who we are, or Republican PR machines like Larry Hogan’s will do so for us.

It means reaching out to diverse groups, from rural voters to LGBTQ voters, to multi-ethnic voters, as well as to our traditional constituency groups, especially organized labor, so that everyone has a seat at the table. (In fact, if I am fortunate enough to be your state chair, my first order of business will be to get a bigger table!)

And it means doing more to help those brave souls who put their names on the ballot each year, with the word “Democrat” next to it, to ensure we get the government we deserve. The party cannot only do more to help our elected officials and our candidates, it must do more.

Finally, I believe we need to do more, a lot more, to protect and facilitate voting. We need to work with the state legislature to create a nonpartisan commission to make voting easier, guard against voter suppression and ballot challenges, as well as foreign interference, and eliminate the sort of errors that occurred at the Motor Vehicle Administration this past year that leave the integrity of our vote subject to question.

The impact of Gov. Hogan winning in 2018 will be felt not just over the next four years but, potentially (depending on his impact on redistricting), over the next 12. His impact will be felt even longer through the judicial appointments he can now make to our state’s highest court, shaping our legal system in ways we cannot fully anticipate. This is especially untenable for the people and areas of the state he has neglected.

I am running for chair of the Maryland Democratic Party because our future could be – and should be – so much more than our present.

Politics no longer takes a vacation, even over the Thanksgiving holiday. While we were dressing our turkeys, Donald Trump was tweeting incendiary attacks against the admiral who oversaw the successful mission against Osama Bin Laden, and Nancy Pelosi was campaigning for speaker of the newly Democratic House of Representatives.

In Maryland on the eve of Thanksgiving, more than 20 candidates filed nomination papers to run for eight leadership positions in our Maryland Democratic Party election on Dec. 1. This is a record number of candidates, and that signals the vitality and relevance of our party in these critical times. Roughly 300 central committee members from across the state will chose from a diverse set of choices, by geography, gender, race, age and political persuasion, but they are all committed Democrats to their core. We are running respectively for party chair and vice chair to build on our Nov. 6 Democratic electoral successes, offer new ideas, and provide continuity as we tackle the next challenge — electing a Democratic president to topple Donald Trump in 2020 and a Democratic governor of Maryland in 2022.

2018 renewed our hopes of Democratic governance across America after voters offered their verdict on the Trump presidency and elected an additional 40 Democrats to the House of Representatives. Nationally and in Maryland, it was more of a rising Blue Tide than a Blue Wave. Maryland Democrats picked up eight seats in the House of Delegates to solidify the veto-proof state legislature, and we reelected Sen. Ben Cardin, Attorney General Brian Frosh, Comptroller Peter Franchot and our seven members of Congress by wider-than-ever margins. While we didn’t succeed in electing Ben Jealous as governor, we got 1.2 million Democrats to the polls, a record for a midterm, successfully clipped Larry Hogan’s electoral coattails, and laid a stronger-than-ever foundation for future Democratic wins.

We flipped two county executive seats from red to blue while holding four other seats in competitive races. In rural areas like Anne Arundel, Carroll, Dorchester, Harford, St. Mary’s, Talbot, Worcester, Wicomico Counties, we flipped county and legislative seats. And, we elected more women and racially diverse legislators than ever before. Nearly one-third of the Maryland Senate will consist of new members, as a new generation rises into leadership.

As interim party chair for the past two years, it was my privilege to help craft this All Maryland strategy, which along with strong candidates like Cory, played an important role in our successes. Over two years, we raised $4 million to move the party into a modern headquarters, improve the data collection on the voter file, acquire 1 million cell phone numbers, ramp up our digital communications, recruit and train more diverse candidates, hire an outstanding staff of eight people, and ramp up to 70 people and open 25 offices after the 2018 primary for our coordinated campaign. Since March 2017, I drove to every county multiple times — putting 30,000 miles on our 10-year-old family car — to meet with central committees, speak at Democratic breakfasts, gala dinners and rallies, meet with aspiring candidates, launch canvasses, and help all our candidates.

In Baltimore, Cory led a new wave of young candidates rising from the House of Delegates into the Maryland Senate. All politics is local, and we both know that victories spring from the grass roots to the grass tops.

That’s why I was convinced to run again and encouraged Cory to join me: to provide the fresh perspective of a rising Baltimore grass-roots leader with the stability and continuity we need to work even more effectively with new party officers and our 24 central committees — where 50 percent of the membership is new — to take our Maryland Democratic Party to the next level. Our goal is to delegate more, to lead collegially, and spread the burden and rewards of these volunteer positions as we improve our governance, processes and grassroots infrastructure.

In the coming days, we will swear in five new county executives and after the holidays, a new congressman on Capitol Hill, and dozens of new state legislators in Annapolis. Maryland’s future Democratic leaders will be among them. We are excited and hope to play a part in ushering in this new era, along with others vying for these increasingly important party roles.

Kathleen Matthews, the incumbent chair of the Maryland Democratic Party, lives in Montgomery County. Cory McCray, a state delegate who was elected to the Senate on Nov. 6, lives in Baltimore City.

NOTE THAT THERE WILL BE OTHER FOLKS DOWN-BALLOT VYING FOR POSITIONS IN THE NEXT STATE DEMOCRATIC PARTY ORGANIZATION. HERE IS THE LIST: 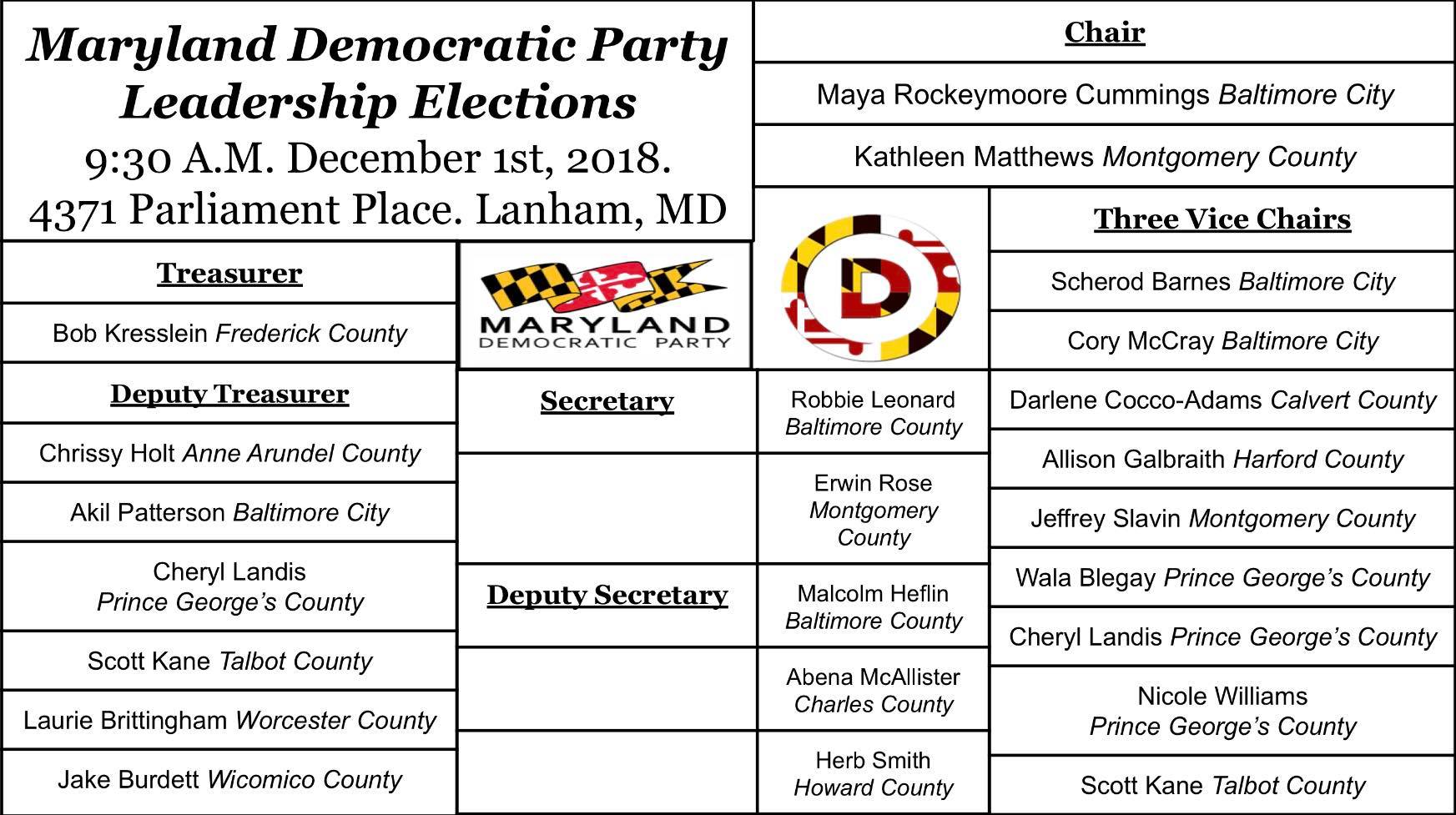