Sidney and Me at Twinbrook: Getting into the activist comfort zone

Steve Melkisethian walks the Progressive Montgomery walk and finds a comfort zone in the Town Hall environment, where public officials hope they control the tempo and agenda. Sometimes, thanks to activists like Steve, their plans don't quite work out...

/By Steve Melkisethian/ The election of Donald J. Trump to the presidency of the United States of America was a catastrophic blow to our social justice movements. We are living in dangerous times.

There is a silver lining. We are now united as never before.

People are creating and joining multiple activist groups, working hard to find common ground in issues and values. The Town Hall interference movement is an attempt to demand accountability from our elected officials but it is not enough. Next up? We need to radically reform the Democratic Party to reflect our shared Progressive values or replace it. This no longer seems like an impossible dream. In my view, the success of the Bernie Sanders movement points the way. How does this happen in our own communities? 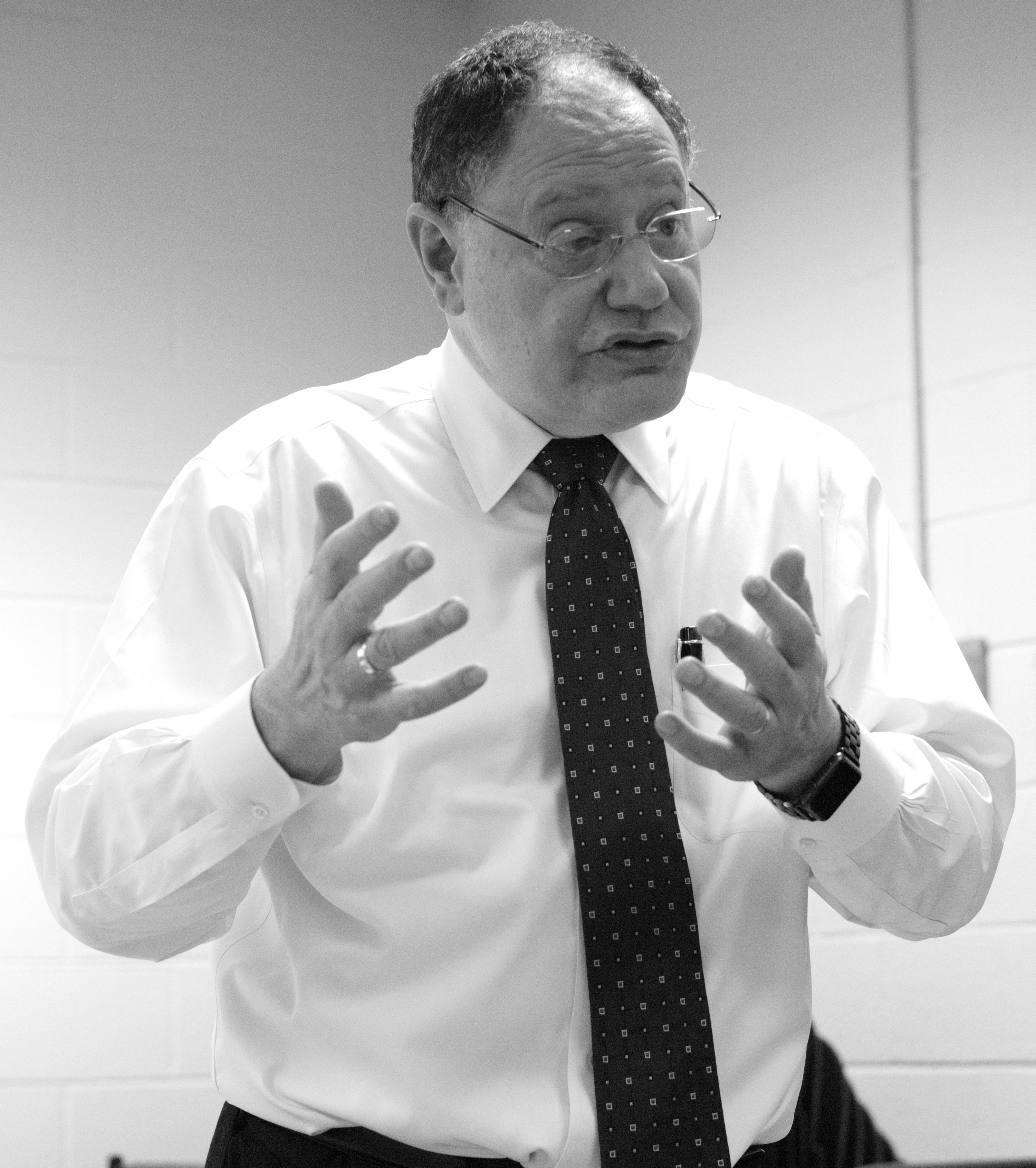 On January 11, 2017 I rallied with my Progressive Maryland comrades to get in County Executive Ike Leggett’s face about his veto of the $15 minimum wage at his Budget Forum in Silver Spring. When I first arrived at the East Montgomery Center I was outside of my comfort zone. The place was crawling with heavily armed County cops and we were getting the evil eye as we assembled in the lobby. Dylan chilled us out, got us organized and Sophia kicked it off inside the meeting with a personal testimony and question to Ike about $15. We chanted our slogan longer than we planned on, gathering support from other forum audience members on every beat and marched out peacefully as a group. Lesson learned? When you have a tight, disciplined group with some seasoned hell raisers in your corner, confrontation is an effective way to challenge power and keep a compelling issue in the public eye.

I think we may have moved the needle a little bit and forced Ike to continue to deal with an issue he’d love to see dead and buried. His new strategy of asking for a study of the issue is largely a delaying tactic we’ve all seen before. He knows that this is an issue whose time has come and it’s the vast majority of citizens against his corporate* buddies in the political donor class (Ike never tires of telling us that he’s like the successful CEO of a 5 billion dollar corporation).

At some point the clock is going to run out on him. The embarrassment and political damage to his allies will continue to accrue and they’ll put pressure on him to do some kind of deal. The final deal will not be all of what we wanted but will be better for working folks than no deal at all.

When I saw a post on Progressive Maryland’s Slack platform asking if anyone would attend Councilmember Sidney Katz’s Town Hall to ask him about his NO vote on Marc Elrich’s modest bill to gradually raise the Montgomery County minimum wage to $15 I decided to step up my game and go solo. On the Sunday before the event I actually did a 'dry run' to the Town Hall location so I wouldn't get lost and be late. On a lovely Monday evening I arrived at Twinbrook Library about 30 minutes early so I could sign up if necessary to ask Katz my question. While I was waiting outside numerous neighborhood folks, many with kids, walked up to the library door only to find that it closed at 6 p.m. One kid started bawling. I mean really bawling, for some minutes. The Twinbook library, like some others in the county, seems to be run down, neglected but deeply appreciated by its patrons. I’ve heard County librarians complain that Ike doesn’t care about them, cutting staff and operating budgets to the bone. I briefly considered bringing this up when I later confronted Councilmember Katz but reconsidered. I was here on a mission. Tonight I’m Mr. Fight For $15, not Mr. Keep Twinbrook Library Open Like Vegas, Baby. I did mention the truncated hours to another Town Hall attendee and she agreed to raise the issue. Too bad for me that I handed off my issue to a women who later declared that she would “move out of Maryland if they declared it a Sanctuary State”. I’m telling you, Trump really let the evil genie out of the bottle and I don’t know if we’ll ever be able to put it back.

When Katz arrived at the library he was unsure where the entrance to the meeting actually was. I pointed out to him that there were fliers with directional arrows taped to the closed library glass doors, and that the meeting hall was located down a flight of outside stairs. I’d already circled the building before he arrived to find the proper entrance. When I entered the meeting room at 6:50 p.m. Katz warmly thanked me for helping him find his way. “Thanks, I’m happy to be useful…” I replied. He jokingly replied that he wished he was more useful.

My original intention was to attend the Town Hall and read a short, collegial statement questioning Katz about the ‘why’ of his NO vote and offer to work with him to get to ‘yes’. "Councilmember Katz, you voted against raising the county's minimum wage to $15. What were your objections to that bill? What would it take for you to vote for such a measure?" Justin Vest had warned me that Katz would likely respond that he wants to see the result of Leggett’s study and that he supports $15 but wants to figure out the best way to do it. Justin also asked me if I was willing to in interrupt or call out a counter response. I responded that I didn’t want to get out of my depth or get too aggressive on the first go. If Katz once again expressed opposition to getting to $15 in 2017 then I'll take it to the next level the next time he showed up.

My prepared question was rendered moot when Katz launched a softball Powerpoint presentation explaining his position on $15. I switched into confrontational mode and we went back and forth for some time. I challenged his assertions that $15 would be a job killer, that the country minimum wage was already high enough and that Montgomery County would be at an economic disadvantage if was one of only a few jurisdictions with a $15 minimum. Katz said he’d go with the results of Ike’s study, slated to be available in July. I asked him if he knew anything about the methodology of this study or who was actually doing it. I stated that the effects of the minimum wage have been studied to death and that economists and think-tankers seem to fall on one side or the other (pro-labor or pro-biz…) depending on their ideological bias. We agreed that this was a problem but, in retrospect, I suspect that this is an issue with no purely empirical middle ground. Somewhat condescendingly, Katz asserted that proponents of a higher minimum wage failed to see “…both sides of the equation” in terms of the interests of both business and workers. I responded that I had lived on both sides of the issue as a former minimum wage worker and a longtime small-business owner and employer. Katz also denied my challenging assertion that Roger Berliner had promised, on stage at Jamie Raskin’s Silver Spring Town Hall, in front of over a thousand cheering citizens to get to $15 in 2017. I encourage all to view the video on You Tube and reach their own conclusions. Katz ended the exchange by saying “That’s all I have to say on this subject.”. There were two news crews videorecording the exchange but I don’t know how to get my hands on the footage.

The Council members who voted against $15 all say we need another study and that the new information they receive will be the deciding factor going forward. It makes me wonder how they made a voting decision in the first place. For the last decade we’ve all seen report after mind-numbing report about the ever widening ‘income inequality’ gap. Now is the time to actually do something about it. If not now, when? See you in the fight.