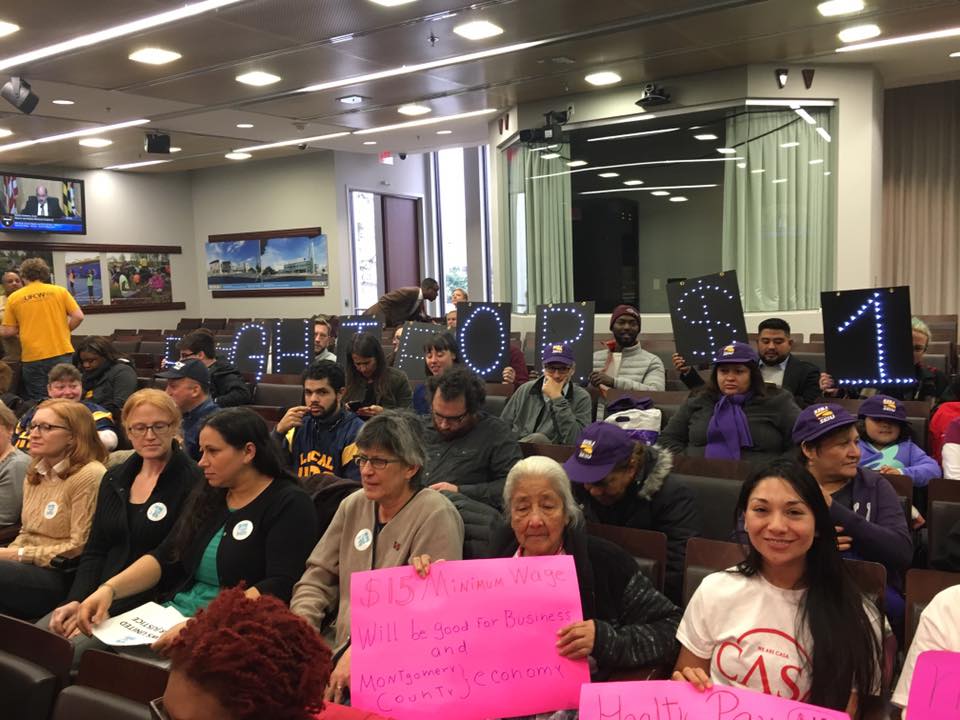 Though a MoCo Council majority appears ready to pass a $15 minimum wage, Council President Roger Berliner is using his agenda-setting power to attempt a delay for a study of its effects on local businesses. Study or not, it seems likely the Council won't be able to act until it begins its 2017 session.

/By Hal Ginsberg/ On Wednesday December 7, eight of Montgomery County’s nine councilmembers discussed Councilman Marc Elrich’s proposed legislation to raise the minimum wage to $15 per hour.  The hearing was convened by the County’s Health and Human Services Committee. (HHS)  Councilmen George Leventhal, Roger Berliner, and Craig Rice sit on the committee.  But the entire council, except for Councilman Hans Riemer, participated.  Video of the hearing can be seen on the Council’s website here.  A number of Progressive Montgomery members attended and expressed support for the increase.

The hike would be implemented in graduated steps with the $15 wage kicking in on July 1, 2020.  If enacted, Montgomery County’s minimum wage would mirror closely the District of Columbia’s through 2020.  But the District has already gone beyond what Elrich is proposing.  After 2020, annual raises in the minimum wage in the nation’s capital will be automatic and tied to inflation.

Councilman Elrich has support from four other councilmembers.  But he is hoping for a sixth vote in order to override a possible veto by County Executive Isiah Leggett.

Based on their statements at the hearing, it was clear which four of the councilmembers present support increasing the minimum wage and which four have misgivings.  George Leventhal, who chaired the hearing, Tom Hucker, and Nancy Navarro all spoke several times in favor the legislation.  Leventhal, Hucker, Navarro, and Hans Riemer, the absent councilman, have all signed on as cosponsors.

Leventhal and Hucker both opined that the Council had all the information it needed to conclude that the benefits of a $15 minimum wage to low-wage workers and the county more generally would greatly outweigh any additional costs that some businesses might incur.

Leventhal pointed out that the Council raised the minimum wage several times over the past 15 years and has not seen any job loss as a result.  In fact, he touted the County’s current unemployment rate of 3.5% -- well below the nation’s -- as evidence that a higher minimum wage might well boost the local economy, which is in any event strong enough to absorb slightly higher labor costs in certain industries.

Councilmen Hucker and Elrich argued that the county has a moral obligation to ensure that low-paid workers can afford to live in the county and enjoy a decent life.  Elrich noted that it isn’t right to place all of the burdens of the high cost of living in Montgomery County on workers earning poverty wages.  He also contended that full-time workers want and deserve the dignity of knowing that they are earning enough to take care of themselves and their families.  Relying on government assistance to supplement wages is ultimately dispiriting, he said.

Councilwoman Navarro pointed out that a high proportion of minimum wage workers are women, immigrants, and minorities.  Raising the minimum wage would help reduce the wealth gap.  All four of the councilmembers who support the minimum wage hike argued that impact studies were not necessary.  Montgomery County’s economic success in the aftermath of recent minimum wage hikes demonstrated that the net effect of a hike would be a positive one.  This position was given support by legislative attorney Josh Hamlin who had submitted a report to the Council and testified that San Francisco, Los Angeles, New York and the District of Columbia have all seen their economies grow at a healthy clip after raising the minimum wage.

Councilmembers Nancy Floreen, Craig Rice, Sidney Katz, and Council President Roger Berliner each expressed misgivings about the legislation although all agreed in principle that the $10.75 current minimum wage should continue to increase after its scheduled rise to $11.50 on July 30, 2017.  Councilmembers Floreen, Katz, and Berliner all showed concern for small business owners who might not be able to meet new higher payroll obligations.

Berliner noted that although Montgomery County’s economy seemed strong, Hamlin’s report noted that there appeared to be a downturn in the total number of cashiers and other low-wage positions since the most recent minimum wage hike was passed.  Berliner expressed worry that more increases could lead to fewer opportunities for entry-level workers.

In any event, Berliner suggested that there’s no rush to pass the legislation right away.  As noted above, the current minimum wage law provides for one more bump next summer.  Accordingly, Berliner said, the council could put off a final decision for at least a year.  During that time, he urged, the Council should commission a study to examine the impact a further rise would have on employment throughout the County as well as on the profitability of small businesses.  Councilmembers Katz and Floreen appeared to agree to this proposed course of action.

Councilman Craig Rice’s comments were focused on the disproportionately high unemployment rate that blacks and especially black youth face.  He argued that the Council needs to address this first before raising the minimum wage higher.  He seemed especially worried that a rising minimum wage could lead businesses to cut back further on the number of jobs available to young African-Americans.  Councilwoman Navarro reacted strongly to these comments.  She noted that people of color and immigrants would benefit disproportionately if the Council raised the minimum wage and that the Council could also take steps to reduce the unemployment rate among young black residents.

In addition to staff attorney Hamlin, the Council heard testimony from Carlos Jimenez, the AFL-CIO’s Metro Washington Council Executive Director, in support of the bill.  Jimenez noted that workers simply cannot afford to live in Montgomery County on a minimum wage salary.  Ilaya Hopkins from the Montgomery County Chamber of Council worried that raising the minimum wage beyond currently contemplated levels could harm local companies and lead to a slowdown in hiring.

In the end, HHS did not endorse the minimum wage bill.  Leventhal voted in favor.  Rice opposed it and Berliner abstained pending additional studies.  The entire Council is meeting on December 13 for the last time in 2016.  Based on Council President Berliner’s insistence that the Council weigh the pros and cons of commissioning yet another minimum wage hike study -- this one focused on the specific impact on Montgomery County -- it appears that the minimum wage hike will not be voted on until 2017.

If the Council approves the study on the 13th, the ultimate vote will likely be postponed until the study is completed and reviewed sometime late next year.  If the Council votes down the study, Council President Berliner assured the bill’s sponsors that it would be the first matter taken up in the new year.  With that assurance the meeting was closed.

We will continue to follow this story and provide updates as it develops.

Hal Ginsberg is a regular blogger for PM BlogSpace and lives in Montgomery County. He blogs at halginsberg.com