Orlando --Can we turn our anguish and grief into action?

The hate crime that cost 49 lives in Orlando highlights gains activists have recently made in human rights and the backlash, exploited by politicians, that shadows the gains and requires further struggle.

These men and women  were victims of our country’s worst modern day hate crime. By now everyone knows that their lives were ended  at Orlando’s Pulse nightclub on Latin Night during Pride Month--their joy, their futures, their plans, their dreams, their love all ended by a hate-filled man using a deadly assault weapon he bought at a store; a military rifle that should never be in the hands of civilians.

As I hear the stories about these fellow Americans I’ve been thinking about my experience coming out and about the importance of having gay clubs to go to when I was in my 20s. It was the 1980s and I was fortunate to have a supportive family and co-workers but it wasn’t at all possible for us queer folk to be fully out and open in all aspects of our lives.  Far too many people were trapped in the closet and forced by our culture and our politics to suppress their identities.  The bars and clubs were a safe haven.  A place where we could be open, have fun, be affirmed, and be ourselves. Gay pride events and bars like Pulse still play a big role in our unique community – for people who are out and for people still leading closeted or partially closeted lives.

It is definitely easier now than it was 30 years ago to be out and equal because we’ve built a powerful movement for social change and justice.   We’ve won marriage equality and in some places parental rights and protections from discrimination in housing or on the job.  The Stonewall Inn  in New York City, where transgender patrons helped ignite the modern gay rights and gay pride movement in the summer of 1969, has been designated a national landmark.

But we still don’t have full equality and there’s an ugly backlash roiling against us that’s inflicting pain  and undermining the gains we’ve made.  What was done to us in Orlando is an extreme and violent expression of that. 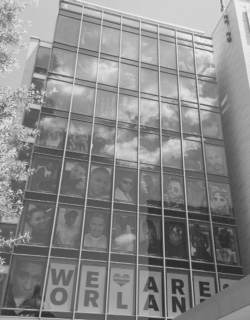 We need some time to absorb what happened; to grieve; to honor the victims and their friends and families; and ways to tend to the recovery of those who were injured and to the healing process for the entire Orlando community. We can also use this time and the days ahead to stand together and do something.   We can channel our anguish into action and create changes that will improve the quality of life for LGBTQ folks and for all communities.

Here are some things you may want to reflect on and do:

Know and help others understand that gay and transgender people are not a threat (in bathrooms, in schools or anywhere.)  We contribute to building this country every day especially when it comes to creating a more loving and inclusive society. We live in every neighborhood, work in every profession and occupation; we’re siblings, parents, children, aunts and uncles, cousins, and grandparents; you can find us on college campuses, in the military, at churches, mosques, and temples; in the halls of Congress, on the soccer field and in baseball stadiums.  Our struggle for freedom does not come at the expense of anyone else’s freedom, including religious freedom.  That’s what some leaders and groups want people to think--they marginalize us and treat us as expendable when it comes to our country’s priorities.  This kind of bigotry is all too familiar in our country as it has been used to oppress communities of color for generations.

Call out divisive and hostile rhetoric, wherever it comes from and whenever you hear it.  Don’t let right wing groups and political leaders try to turn back the clock on civil and gay rights.

Our community needs to recover. And we need to keep organizing.  So please:

--Give money.  Financial resources will help the families of the victims and will be used by the groups on the ground to provide services.  Learn more at http://www.weareorlando.org  and from the GLBT Community Center of Central Florida, based in the heart of Orlando.

-- Support groups doing vital policy work and organizing in Florida where 200 anti-gay bills were introduced in the past year.  Equality Florida is an effective statewide group and is helping to coordinate the response to this tragedy.  If you want to aid LGBTQ efforts in Maryland check out Free State Legal.  National  advocacy organizations like the National LGBTQ Task Force,  the National Center for Transgender Equality and the Human Rights Campaign are making a difference, too.

--Speak out against hate crimes; speak up for full equality and dignity of all LGBTQ people. Get the institutions that you’re a part of to do the same.

--Get involved in the campaigns to stop the sale and distribution of assault weapons—on the federal level, support the progressive gun bills coming up in Congress this month.  On the state level, the law we passed in Maryland in 2013 to prevent the sale of guns like the one used in Orlando is being challenged in the courts.  We need to preserve and protect this law.

Many national organizations from Everytown For Gun Safety  to MomsRising  have researched and sounded the alarm regarding the epidemic of gun violence. They are pushing to enact a set of sensible policy solutions.  Check with them to learn more about what’s happening and what you can do.

--Vote and get others to vote this November.  Elections make a difference and so does your vote.

For Angel, Luis, Brenda, Akyra, Amanda, Rodolfo, Juan, and all the others who lost their lives let’s honor them and remember them.  Let’s take positive action to create a country and a world where LGBTQ people can live safely and with full human rights and dignity.

Patty Snee lives in Takoma Park with her life partner, Ellen, and is a strategic consultant with Base Builder, a national LGBTQ led canvass network

Tweet
Orlando tragedy illustrates both gains and backlash in human rights struggle
Orlando --Can we turn our anguish and grief into action?
Read the blog at Progressive Maryland