Our money is misspent and keeps us poor, but "America will be"

This Tuesday the Poor People's Campaign "will remember the 250,000 people who will die this year because of low wealth while we invest over $700 billion in a bloated military budget." But Rev. Barber declares "we refuse to give up the flag and the hope that a movement of people can make America into the nation we have never yet been. We are pressing on toward a Third Reconstruction."

The dedication of our people-created wealth to the people’s needs, not to enriching the few while we impoverish the many, is at the core of Progressive Maryland’s mission.

Likewise, the ongoing Poor People’s Campaign 2.0 focuses on reversing the causes of inequality. This week the PPC returns to Annapolis and downtown DC to focus on militarism and the deficits in public goods that it causes. Rev. William Barber’s Memorial Day message reinforces that stark injustice.

As the Poor People’s Campaign: A National Call for Moral Revival prepares for our third week of direct action, the nation pauses for Memorial Day weekend. Listening to many, including veterans in this movement, we chose to focus this week on our challenge to militarism and the war economy as well as the proliferation of gun violence in the US. We believe the greatest patriotism for moral agents is insisting that America become a more perfect union. 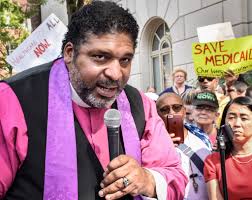 As we reclaim legislatures at the people’s houses across America this Tuesday, some of us will carry American flags to symbolize the unfulfilled promises for which our people have sacrificed. I carry the flag for my father, who offered first-class blood for second-class citizenship during World War II, only to come home to the Jim Crow South where German POW’s rode in the front of the train while he was forced to sit in the back. Veterans like my father knew the hypocrisy of this nation. With Langston Hughes they cried, “America never was America to me / and yet I swear this oath: / America will be!”

When we visited a homeless camp in Washington State, a veteran living there flew the flag on a stick outside his tent. He asked us to carry the flag for him—for the veterans who live and die in poverty while corporations make a killing on killing.

Some will also carry flags and kneel to protest the killing of innocent Black, Brown and Red people at the hands of police. Some will carry flags because at the same time as flags fly at schools across the country, many are killed by a society that feeds on gun violence.

As we gather this Tuesday, some of us will be wearing carnations to remember the people who died while serving in our nation’s military. We remember Memorial Day’s roots in Black people honoring the graves of soldiers who fought in the Union army to end slavery and create the possibility of Reconstruction. We honor each person who was willing to serve when we cry out against unjust war-making and unnecessary military spending that robs the poor here at home. We remember all those who have suffered moral injury and died from suicide and from the loss of limb and mental stability.

We remember all the people who have died in unnecessary war—children and families from Afghanistan to Iran, Iraq & Palestine—because of decisions to promote war instead of peace.

We also remember those who die from the proliferation of guns on our streets and the militarization of poor Black and Brown communities here at home.

This is why, in addition to flags and carnations, we will also carry sackcloth this Tuesday to remember the 250,000 people who will die this year because of low wealth while we invest over $700 billion in a bloated military budget. We declare that as long as 140 million people live in poverty in the richest nation in the history of the world, none of us are truly honoring those who gave their lives serving this nation. As long as systemic racism cripples our democracy through voter suppression and as long as this administration weaponizes deportation—even deporting veterans and their family members—we are not honoring “liberty and justice for all.”

Around the world and among the poor in this nation, we understand that many are angry and ashamed when they see the US flag. Great evil has been done under this banner—and much of it to us. But just as we refuse to give up the Bible to extremists' heretical interpretations, we refuse to give up the flag and the hope that a movement of people can make America into the nation we have never yet been. We are pressing on toward a Third Reconstruction.