Raskin and Pelosi rallied the crowd to cheers with their analysis of the GOP tax plan. Raskin attacked the plan for being largely composed of corporate giveaways. These include a drop in the corporate tax rate from 35% to 12% on income currently stashed overseas and 10% on profits from transnational activities. Deriding the bill as the “billionaire tax break and job cutting plan,” Raskin noted also that the Republican plan slashes $1.5 trillion from Medicare and Medicaid over a decade.

/By Hal Ginsberg/ A raucous standing room only crowd greeted Minority Leader Nancy Pelosi and Democratic Congressman Jamie Raskin at the Luxmanor Elementary School cafeteria early Saturday morning (Nov. 4).  The House members along with several Montgomery County residents came to discuss the dangers to Maryland and the nation that they see in the Republican House tax bill.

Speaking first at the town hall meeting he had organized, Raskin attacked the plan for being largely composed of corporate giveaways. These include a drop in the corporate tax rate from 35% to 12% on income currently stashed overseas and 10% on profits from transnational activities. Deriding the bill as the “billionaire tax break and job cutting plan,” Raskin noted also that the Republican plan slashes $1.5 trillion from Medicare and Medicaid over a decade.

This, Raskin warned, would cause steep hikes in Medicare premiums and millions of poor and struggling American to lose their health insurance. The Montgomery County representative slammed House Republicans for trying to advance the legislation “at the speed of light under cloak of night.” By contrast, he noted that the 1986 tax overhaul involved dozens of hearings and well over two years of wrangling and public debate. 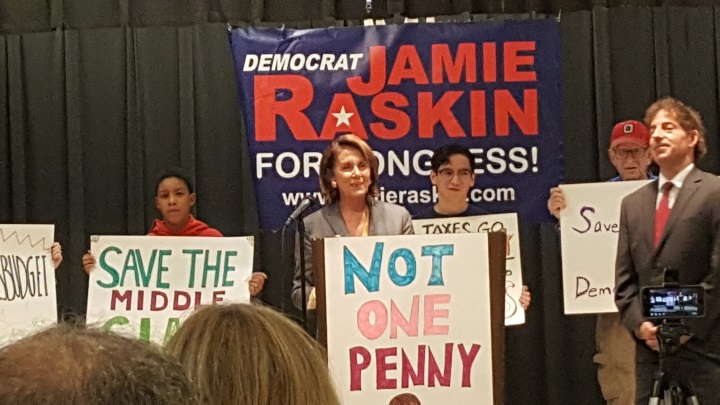 Citing the Washington Post, Raskin identified the Republican plan’s various winners and losers. The winners, said Raskin, besides big corporations, include the super-rich, and -- in an obvious dig at President Trump -- people who pay the alternative minimum tax. The House bill eliminates both the alternative minimum tax and the estate tax, which applies to only the .2% wealthiest American families.

Three Montgomery County residents spoke about how they and their family would suffer if the bill became law. Aileen Klein railed against a provision that eliminates tax deductions for medical expenses. She noted that a chronic health condition requires her mother to spend $10,000 out of pocket for treatment every month. Social security payments and other income make this barely affordable now. But if the income relied upon to pay the medical bills were taxed, her mother would ultimately slide deeper and deeper into debt.

Hadar Susskind, Senior Vice President of Government Relations with Community Foundation at the Council on Foundations, addressed the harm that charities would suffer if the bill becomes law. Since the Republicans propose doubling the standard tax deduction, most current donors would lose any incentive to be charitable. He estimates that up to $13.1 billion could be lost just when non-profits serving the needy would be most critical due to Republican cuts to safety net programs and the states.

Blair High School senior Chas Goldman criticized the provision that eliminates the tax deduction for interest paid on college loans. He noted that since he was born his parents have been saving to pay his college tuition with the expectation that the interest on his student loans would be deductible. If the Republican plan is enacted, the senior will have to change his college plans or impose a significant added financial burden on his family.

Former House Speaker Nancy Pelosi was the final speaker. Arguing that the “bill undermines opportunity and fairness, the very essence of America,” she solemnly intoned that the upcoming fight would be a “moment of truth for America.” But she then elicited chuckles when she riffed on the name of the activist group Black Lives Matter with the line “tax lies matter”. She called the billions of dollars cut from education perhaps the “dumbest” aspect of the bill since government spending on education brings the greatest return on investment to the American people. Pelosi personalized the discussion by noting that teachers would no longer be able to deduct the cost of needed school supplies that they purchase for their classrooms while the family of Secretary of Education Betsy Devos would reap millions in tax breaks.

The hundreds in the audience rose on several occasions to applaud the Democratic representatives and whistled appreciatively at various points. At the town hall’s conclusion, several attendees said that recent Republican health care proposals and the current tax legislation were activating them to join resistance groups to fight back. Given the urgency with which the Republicans are moving forward, we are likely to learn soon enough whether Congressional Democrats and progressive activists can stop them.

Hal Ginsberg is a Montgomery County activist and frequent contributor. He blogs at halginsberg.com