Three of Prince George’s County’s progressive-resistance organizations met in a profitable and friendly exchange Nov. 1 sponsored by PG Democratic Socialists of America organizing committee, Progressive Prince George’s and Our Revolution Prince George’s. It was a good mix of the three, thirty-plus activists there thanks to the courtesy of IBEW Local 26 in Lanham to hear Del. Jimmy Tarlau discuss the upcoming 2018 General Assembly session and what progressives could hope to press for.

/PM BlogSpace Report/ Three of Prince George’s County’s progressive-resistance organizations met in a profitable and friendly exchange Nov. 1 sponsored by PG Democratic Socialists of America organizing committee, Progressive Prince George’s and Our Revolution Prince George’s. It was a good mix of the three, thirty-plus activists there thanks to the courtesy of IBEW Local 26 in Lanham to hear Del. Jimmy Tarlau discuss the upcoming 2018 General Assembly session and what progressives could hope to press for.

Tarlau (D-47th Dist.), who is on the state board of Our Revolution and a member of Progressive Maryland, went over a list of political priorities for progressive initiatives and legislation for 2018.  Meeting attendees all noted the convergence of those priorities with their own.  (The list, adopted as OR-Maryland’s Legislative Agenda, is below). 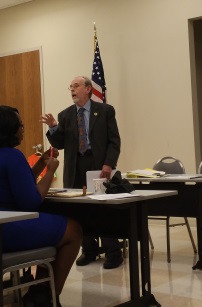 Overriding Gov. Larry Hogan’s veto of last year’s earned sick leave measure is atop the list. – Tarlau said he believed that would happen, though harder work would be necessary on several other first-order priorities such as setting a new goal for the Renewable Portfolio – the percentage of non-fossil fuels in the state’s electric power mix – of 50 percent by 2030. Passage of last year’s Trust Act, a protection against excessive federal moves against immigrants and undocumented persons, was also among those priorities in which he expressed qualified confidence.

Also on the top-priority list, but probably requiring more public pressure, were bail reform – a near-elimination of cash bail in accordance with a recent court ruling, but fiercely opposed by the well-monied bail bond industry – as well as debt-free community college and a state single-payer “Medicare for All” health care plan.

Fifteen years ago the Thornton Commission imposed reform of education funding, on the state -- but equal funding for rich and poor community schools has been flagging year by year since then. The Kirwan Commission, charged with updating the Thornton findings and evaluating the educational practices prevalent in Maryland, announced last week it would not make its New Year’s Eve deadline. In 2018, an election year, the legislators will be happy to be able to avoid an equal education funding discussion that would inevitably lead to tax increases, Tarlau suggested.  But, he stressed, talking about social reform without talking about how to pay for change only means accepting the status quo.  And talking about how to pay means shifting the tax burden from working people and putting it on the wealthy.

Tarlau was borderline scornful of the way Democratic and Republican administrations alike – abetted by his colleagues in the Assembly – had steadily discarded parts of the state tax code that captured revenue from the wealthiest and from corporations. The “Millionaire’s Tax” on income that was phased out beginning from the administration of Democrat Parris Glendening (1995-2003) and more recently the state estate tax were eliminated at a cost of significant revenue in a time of structural state budget deficits.

In their aversion to taxes, legislators are showing they are inexplicably “scared of Hogan,” Tarlau said.  Stimulating growth by lowering taxes – even if it worked, which it manifestly has not -- brings no benefit, Tarlau said, because growth “all goes to the one percent,” the wealthiest.

And legislators, he said, are vulnerable to the cascade of former legislative staffers (and even former colleagues) now working as lobbyists for special interests, who are able to wine and dine the Assembly members (in groups only, by the chambers’ bizarre rules) and try to move them their way on current legislation in the frenetic pace of the 90-day session.

Though lobbyists claim to have the information legislators need, Tarlau asserted, the Assembly members themselves develop networks, both among themselves and with advocacy groups, to stay informed on legislation and the issues that surround it. “We can’t be experts on everything,” Tarlau said.

And he added that the more progressive measures would not move through the generally cautious legislature and its deliberative process without public pressure – “we can’t do anything without support,” Tarlau said.

Leaders of the groups engaged at the meeting showed that pressure could come up from the county level. Suchitra Balachandran of OR-PG and Charles Smith of Progressive Prince George’s described the organizing effort for a Small Donor financing bill in the County Council to take big developer money out of its commanding place in Prince George’s elections.  Suchitra also outlined the two-aspects of OR’s perspective: Dem-Enter and Dem-Exit -- work to take over the Democratic Party or to leave it.  These are complementary efforts for to be meaningful they require grassroots organizing.  In that respect, she stressed the need to challenge the lack of transparency or accountability of the Prince George’s Democratic Party and its insider-dominated Central Committee.

And Krystal Oriadha and Amity Pope of Progressive PG outlined a local-state agenda for efforts against mass incarceration of minority youth by tackling the “before” (the school to prison pipeline), the injustice of cash bail to entrap more in the system, and the lack of support for returning citizens after serving time in jail or prison -- specifically citing the lack of halfway houses and rehab centers in the County.  Progressive Prince George’s is working on a range of issues in the County including education, immigrant rights, and transportation.

DSA’s goal in the county is to bring about the closest cooperation of all groups and organizations working for social change in our community around support for a commonly held progressive agenda.  This means combining work around working-class economic issues with support for social justice reforms in all areas of life.  Unity around a shared agenda could be used to organize and engage in next year’s local and state-wide elections and be used to hold candidates accountable to their promises after the elections.

Members of the three groups said they were heartened by the meeting, the message and the sense of unity.

Tarlau’s “greatest message,” according to longtime DSA member Carolyn Byerly, of Adelphi, was that “elected officials listen to groups to guide them.”  Byerly posted in a Meetup comment after the Nov. 1 meeting that Tarlau said there is no way he could possibly know how to evaluate and vote on 2,000 bills a year, so he turns to groups in his constituency, or that he trusts. Thus, we should make our groups strong in number of members and trustworthy, and we should continue to reach out to our elected officials and also to put those among us to stand for office,” Byerly declared in a Meetup comment after the Nov. 1 meeting.

(note the numbers above refer to Maryland House or Senate bills)