Progressives line up against MoCo Question B with citizen group 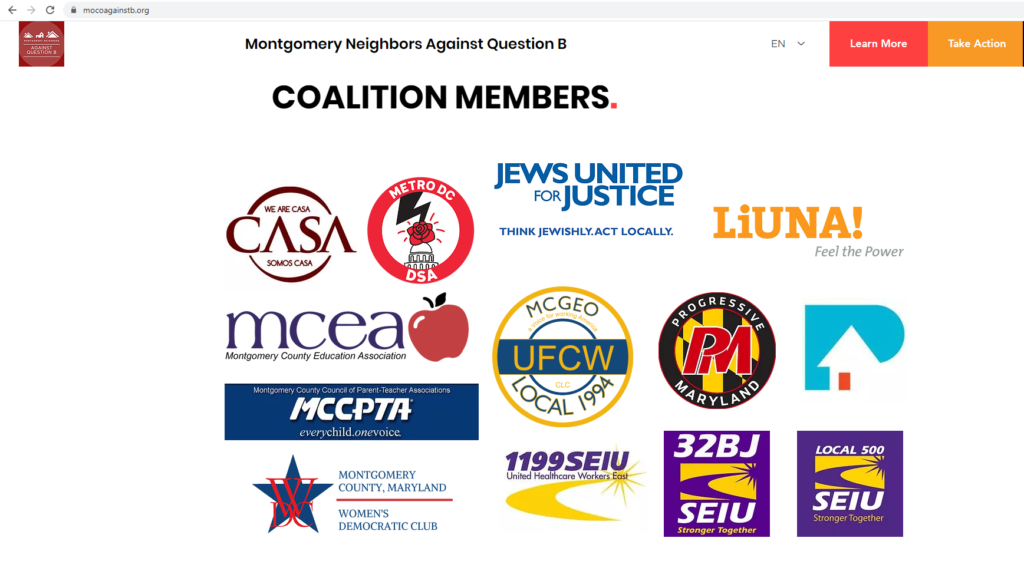 Progressive Marylanders in Montgomery County have been fighting, with allies, to defeat the right-wing stealth measure Question B that would cripple public services in the county with a tax-break windfall for the rich. Adam Pagnucco in the Seventh State blog updates that fight as a new umbrella coalition is launched by a citizen group with many of those allies.

Former school board member Jill Ortman-Fouse is co-chairing a new group opposing Question B, Robin Ficker’s charter amendment on property taxes, along with former Jamie Raskin staffer William Roberts. The group has attracted a large number of progressive institutional supporters as shown from its website below.

Right out of the gate, MoCo Against B has released this video going after the architect of Question B, Robin Ficker himself.

MONTGOMERY COUNTY, September 23, 2020 — Montgomery County residents today saw the first political advertisement on the contentious “Question B” that will be appearing on their ballots this election. The ad, called “Dangerous”, takes aim at the ballot question, which according to the clip, would hinder the County’s COVID response, cause slashes to schools and essential services, and threaten Montgomery County’s AAA bond rating.

The coalition behind the new ad is called Montgomery Neighbors Against Question B and is made up of concerned citizens, faith groups, teachers, firefighters, unions, and local non-profits. Montgomery Neighbors Against Question B is co-chaired by former Board of Education member Jill Ortman-Fouse and current Chair of the Upcounty Citizens Advisory Board, William Roberts. Their treasurer, Daniel Koroma, is a White Oak community advocate and serves as the Business Liaison for the Montgomery County Government. The group aims to defeat Question B by shining a spotlight on its own plain language, its disastrous outcomes, and the intentions of its creator.

“With this new ad, we want to show Montgomery County voters exactly what Question B says and just how damaging it would be to our schools, our essential services, and our economy,” said Laura Wallace with Jews United for Justice, one of the many organizations in the coalition. “Jewish tradition teaches that each of us has a duty to ensure that everyone in our community has the resources they need to thrive — especially during this pandemic. Now is not the time for fiscal irresponsibility.”

Question B is the brainchild of notorious heckler and right-wing operative Robin Ficker. If it were to pass, it would limit the County’s ability to generate revenue by limiting it to the previous year’s revenues, adjusted for inflation. It would strip the Council of its override power and could strangle local schools, emergency services, and other essential services.

Following the launch of this ad, Neighbors Against B will be working until polls close to educate voters on the fiscally irresponsible nature of Question B and encouraging them to oppose it with their vote.