Baltimore's Job Opportunities Task Force released today (Feb. 1) a major study showing that Maryland's official practices in many areas have a disparate impact on poor Marylanders, aggravate their poverty and make an exit from poverty more difficult. Progressive Maryland, like JOTF, has been advocating on these issues for years.

The Job Opportunities Task Force in Baltimore, a major force behind the half-decade effort to get a paid safe and sick leave bill through the Maryland General Assembly that achieved its goal this year, has been examining a deep problem in the state’s handling of issues of poverty. The overall effect of those practices is to criminalize poverty, the subject of a deep-dive JOTF report released today (Thursday, Feb. 1). Progressive Maryland, a longtime ally of JOTF, presents here the definition of the problem and executive summary of the full report, “The Criminalization of Poverty: How to Break the Cycle Through Policy Reform in Maryland.”

The report complements many aspects of the JOTF Policy Agenda for the 2018 General Assembly session.

In August 2016, the United States Department of Justice issued a report following its investigation into the policies and practices of the Baltimore Police Department. The report was in response to the 2015 police-involved death of Baltimore resident Freddie Gray and the subsequent unrest that gripped the city. During that historic week in April 2015, the world watched as Baltimore residents took to the streets to call for an end to police brutality and demand reforms in police accountability. In response to the death of Freddie Gray, what surfaced was communal anger and frustration at a dynamic that has plagued Baltimore communities for decades: an overreliance on incarceration and a divestment in economic opportunities.

Given growing national attention and local concern around the impact of incarceration on working families, the Job Opportunities Task Force sought to define and determine the extent to which the criminalization of poverty is occurring in Maryland. Indeed, the August 2016 United States Department of Justice report on the Baltimore Police Department created a greater sense of urgency around issues of poverty, race and criminal records. Therefore, the goal of this project is to identify whether there are key laws, policies and practices in Maryland that are either unnecessarily penalizing the poor or leading the poor to be unnecessarily arrested, charged with a crime or imprisoned because they are poor and therefore unable to satisfy the demands of the law. Our investigation revealed that the criminalization of poverty is occurring in Maryland, with disproportionate impact on people of color.

Consequently, our findings are organized into three themes:

There are at least four key pathways through which the poor, especially people of color, are put at greater risk of entering the criminal justice system than other groups: racial profiling, civil asset forfeiture, motor vehicle laws, and the collection of child support and civil debts. Part 1 will examine each entry point and how their intersection can easily lead poor communities of color into and through the criminal justice system.

After arrest, certain groups, particularly poor communities of color, face disparate treatment and outcomes as compared to other groups in the community. These groups are also more likely to be impacted by and unable to afford the accompanying fees and fines and resulting increased debt. Part 2 will examine the imposition of both court-specific and court-related fines and fees and its impact on poor defendants in civil and criminal courts.

We must break this cycle. Recommendations for policy reform are presented throughout the report to better understand the magnitude of this issue and explore opportunities to reduce the criminalization of poverty in Maryland. Key recommendations include:

>> End common practices that criminalize the poor by: 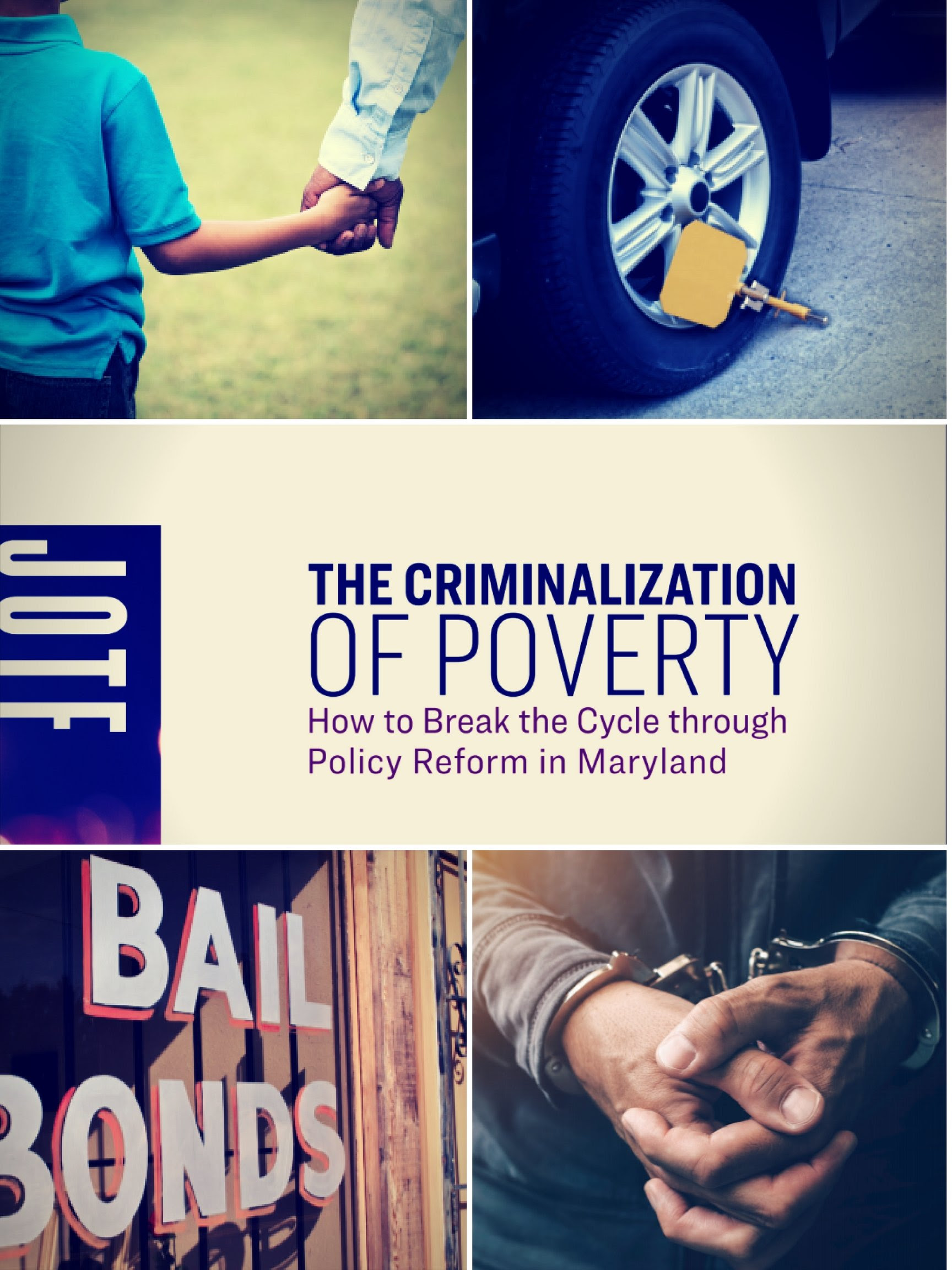 > Create a low-cost auto insurance program for low-income drivers.
> Simplify the process to modify child support orders.
> Eliminate the use of arrest as a way to collect debt.

>> Reform the criminal justice system to end disparate impact on the poor by:

> Limit the use of cash bail.
> Implement robust pre-trial services.
> Eliminate most or all criminal justice fees.
> Determine ability to pay before imposing fees.

>> Limit the collateral consequences of a criminal record and help returning citizens remain out of prison by:

> Expand the statewide “Ban the Box” law.
> Continue to expand and simplify expungement.
> Monitor effective implementation of the Maryland Fair Access to Education Act of 2017 (ban the box on college applications).
> Expand correctional education, job training and education behind the fence.
> Opt out of the felony drug ban on TANF (TCA) and SNAP.

This report reveals that many of Maryland’s current laws, enforcement schemes, monetary penalties and related policies and practices disproportionately criminalize the poor, with disproportionate impact on communities of color.

If we seek to achieve a more just and inclusive society, and if we truly believe that every resident of Maryland should have equal opportunities for economic mobility and life success, targeted reform, both within and outside of the criminal justice system, is needed.