Baltimore County, MD: As we approach primary elections, ​​Working Families Party (WFP) and Progressive Maryland (PM) have officially endorsed Robbie Leonard to be our candidate for Baltimore County State's Attorney for the 2022 Election. Last year, both progressive organizations announced a new partnership to build on progressive successes and enhance electoral power for working people in Maryland. Robbie Leonard is a leader who will listen and be accountable to the demands and concerns of Baltimore County residents. He is a true advocate for the people that supports much needed reforms that will build trust between communities and police.

"I am proud to receive the endorsement and support of the Working Families Party. Together, we can work toward a fair and accountable justice system in Baltimore County. The status quo is broken, and it's time to give the people a choice," said Robbie Leonard, Candidate for Baltimore County State's Attorney. 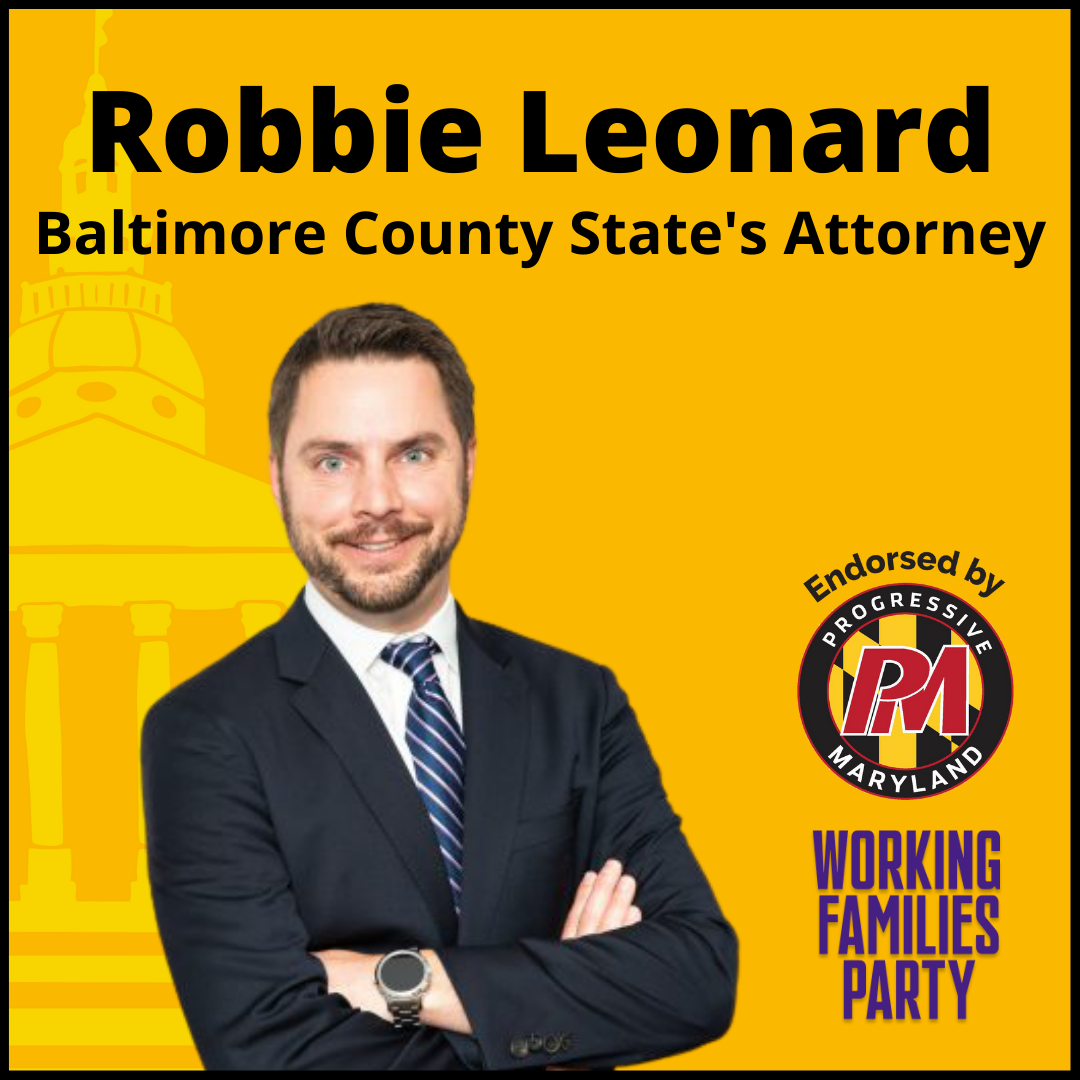 “It’s time to turn the page on the Scott Shallenburger era. Shallenberger’s tenure has been plagued by numerous injustices, including a continual increase in the incarceration of Black and Brown people, and a failure to keep Baltimore County residents safe. Robbie Leonard has proven himself to be a champion for justice. He has delivered results for working people, including standing up in court to ensure that unemployed Marylanders received the benefits they needed when the state attempted to cut those off,” said Larry Stafford, Executive Director of Progressive Maryland. “We are excited to support Robbie’s positive vision for the residents of Baltimore County and will be working diligently to elect him in June.”

“Decades of tough on crime policies have decimated communities, fueled mass incarceration, and failed to keep people safe,” said Vidal Hines, National Political Strategist with Criminal Justice Initiatives for the Working Families Party. “Robbie Leonard represents a real opportunity to chart a brave new course for the Baltimore County State’s Attorney office. Voters are ready for real criminal justice reform that treats victims and defendants with dignity in the pursuit of justice. When Robbie Leonard is elected, Baltimore County will have a champion who will deliver exactly that.”

In 2018, Progressive Maryland and Working Families Party won a slew of state senate races, with victories in District 45 with Cory McCray, District 41 with Jill Carter, District 43 with Mary Washington, and District 40 with Antonio Hayes. In 2020, the two groups won more races across the state, including the victories of Brandon Scott, Baltimore City Mayor; Bill Henry, Baltimore City Comptroller; and April Ademiluyi and Gladys Weatherspoon, Prince George’s County Circuit Court Judges. Together, the two groups plan to roll out more candidate endorsements for the 2022 election cycle.