Training helped me discern that power is in our hands

Progressive Maryland organizer Michael Feldman recounts how his recent training experience focused his understanding: "How do we harness this energy that’s clearly in the streets and push it into the halls of power? No one builds power by accident. We have to understand what power is, why we should want to attain it, and the training to focus ourselves and our fellow progressives into the leaders who can and will change this country."

/By Michael Feldman/ It’s not often that I can say a job training experience has been transformational or caused me to reflect on my current worldview. Recently I attended the Transformational Leadership Training program of Progressive Maryland’s national affiliate People’s Action, and it was exactly as advertised. The skills I learned, the people I met, and the honest, open nature of the training caused me to reevaluate myself, my place in the movement, and the stumbling blocks I’ve encountered in my organizing.

What comes to mind when you think of the word “power”?

Corporations peddling their influence to politicians and affecting policy: being given the keys to their own henhouses. Elected officials who are beholden to their donors, making deals in the proverbial smoke-filled back rooms to enact watered-down legislation and “incremental change.” How do we harness this energy that’s clearly in the streets and push it into the halls of power? No one builds power by accident. We have to understand what power is, why we should want to attain it, and the training to focus ourselves and our fellow progressives into the leaders who can and will change this country. 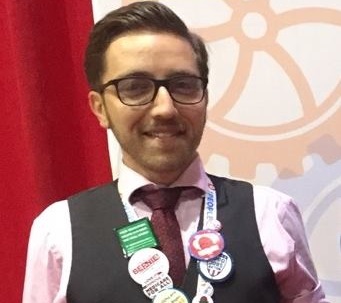 Power is defined as the ability to act and derives from the Latin word posse, meaning to be able. We fight for Medicare for All, a living wage, and reigning in Corporate America, but without power it can feel like we’re yelling into the wind. Power manifests itself in two ways in our political system; organized money and organized people. Total spending for lobbying last year was over $3.1 billion, and there are currently 10,641 lobbyists registered in Washington D.C. The pharmaceutical industry alone has spent $144 million so far this year. But: With enough organized people and organized money we can see our visions of revolution and reform made real. https://www.opensecrets.org/lobby/indusclient.php?id=H04&year=2017

What do you care about? Why? We all need to be clear about our own values, and seek to discern the values of others. We need to reflect on the barriers that may be limiting our potential to organize. By coming to terms with our own self-interests, we can use relationships to find intersectionality between ourselves and those we are building this movement with -- and those that we would like to join it. We can have a meeting with a potential volunteer, gauge their self-interest, and make a proposition to them: a role in our organization that is relevant and meaningful to their life. We can analyze a local county executive we are trying to push on minimum wage or a county council to remove a Confederate monument.

We are seeing a galvanization of the American left, but to be able to coalesce and consolidate our power to effect change we have to be well armed with knowledge and training. We need to learn to build better relationships, discover others’ self-interest, proposition volunteers, and guide them in those roles and their own development as leaders.