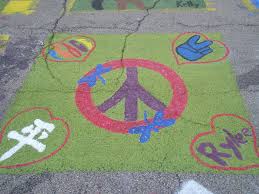 Among our allies in the effort to humanize our system and put resources where people need them is Prevent Nuclear War Maryland and its campaign to move "Back from the Brink" of nuclear exchange risks. Three activists outline the campaign and the huge costs of militarism that drain public resources from people's needs.

/By Charlie Cooper, Gwen DuBois, and Max Obuszewski/ Now is the time for all organizations that promote the public interest and the interests of working-class people in the United States to join together to win popular victories that were unimaginable only months ago.

Prevent Nuclear War Maryland is an organization of activists unified by our goal to reduce the risk of nuclear war. COVID-19 has shown how misguided our foreign policy is. On this small planet, we all share common enemies: nuclear war and militarism, climate crisis and pandemics.

We have seen other rich countries, such as Italy, overwhelmed by this pandemic, and there will likely be more viral pandemics to come. But if there is a nuclear exchange, there is no health system in the world that could provide even a small fraction of the care that would be needed.

We also engage with legislators and the general public to broaden recognition that the spending of about $1 trillion annually on so-called Defense Department and other war-related items does not make us more secure as a nation. Rather, it is the greed and power of corporations like Boeing, Northrup Grumman, and Lockheed Martin reaping tremendous profits off the public.

In 1953, President Dwight Eisenhower commented that unnecessary weapons spending is "a theft from those who hunger and are not fed, those who are cold and are not clothed. This world in arms is not spending money alone. It is spending the sweat of its laborers, the genius of its scientists, the hopes of its children...This is not a way of life at all, in any true sense. Under the cloud of threatening war, it is humanity hanging from a cross of iron.”

Unnecessary weapons spending, as we know, continues despite its outrageous drain on the wider needs of the US public.

The Project on Government Oversight (POGO) has been tracking the development of the F-35 fighter jet for many years. They recently reported in a funding appeal: “[The F-35) is years behind schedule and costs a mind-blowing $143 million per aircraft. It’s not ready for combat, as has been proven time and again in weapons testing, and it would jeopardize the health and safety of our service members.”

And Kirstin Korosec reported on April 17 that General Motors is now delivering ventilators under a federal contract for an average price of about $16,300. At that rate, we can have 8,700 ventilators for the cost of one dysfunctional war plane. And, of course, we also lack sufficient PPE, swabs, test kits, or public health workers.

Since the plan is to buy 2,600 F-35s, the bill will eventually come to almost $400 billion. This is just one corrupt military program. There is so much waste in the military that it’s hard to fathom:

Approximately $30 billion/year for upgrading our nuclear weapons stockpile in addition to $35 billion (see graphic at right) for annual operation of the nuclear arsenal. 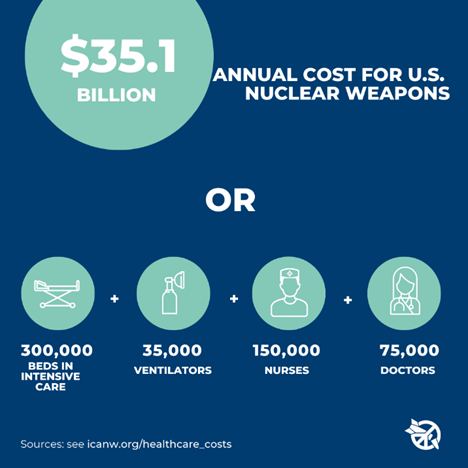 $6 trillion already spent or projected future costs of the wars in Iraq and Afghanistan – that’s $18,000 for every child, woman, and man living in the U.S.

Every tax dollar spent on the military is a theft from housing, drug treatment, education, protection of the environment and other needed social services.  Should 60% of the discretionary budget continue to be consumed by the military, then it will be impossible to rid the planet of climate chaos.

We thank Progressive Maryland for its work to organize people to fight for a more just society and against the austerity regime of both major political parties. This work should include a total reordering of federal budget priorities.

Together, we can work to stop wasting our precious national resources on corrupt weapons contracts, pointless wars, and military adventurism.

The writers are activists in the coalition Prevent Nuclear War Maryland, which is 1) building support in Maryland for a growing national movement called Back from the Brink: to prevent our government from pushing the world to the brink of nuclear war and 2) building local support for the UN Treaty to Abolish Nuclear Weapons. We oppose the US militarism that foments unrest across the globe, squanders hundreds of billions of dollars yearly on nuclear and conventional weapons, and undermines global cooperation.