We Can Take the Lead in Remaking America

The co-directors of our national affiliate, People's Action, have a positive view of the prospects for 2018. Nothing will happen without struggle, of course, but struggle will bring progress despite the GOP oligarchy at the top.

/By LeeAnn Hall and George Goehl<>People’s Action/ We remember well the sense of horror we felt at the beginning of 2017. There was a sickness deep in our stomachs at the very mention of the words “Trump administration,” not to mention what that administration planned to unleash: a border wall, evisceration of health care, a Muslim ban, the violation of sacred lands for fossil-fuel profits, and more.

But then came resolve – the kind of commitment to action by ordinary people that allows us to enter 2018 with what we might call “improbable hope.”

As co-directors of People’s Action, which is now at the start of its second year as a new national organization, it has been extraordinarily moving to play a role in the growing resistance to Trump’s agenda, and to help create a movement that puts democracy where it belongs: in the hands of all the people.

When millions of us marched in the streets the day after the Trump inauguration in the nation’s capital and cities around the country, some wondered if these protests were just a flash of anger that would subside into apathy and acquiescence. 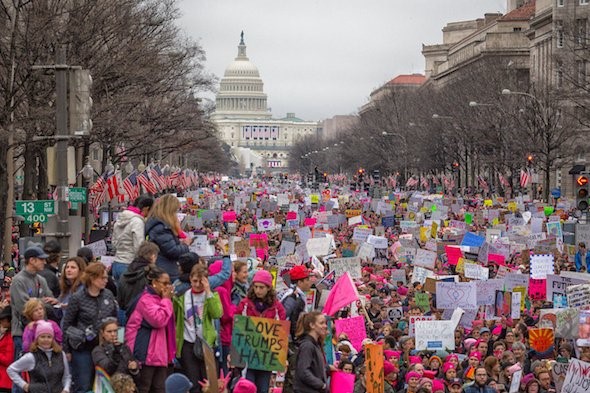 That question was answered with a resounding “No!” when Trump and congressional Republicans sought to take away health care from tens of millions by dismantling the Affordable Care Act and Medicaid.

We will never forget the day in March when a People’s Action member organization, Citizen Action of Wisconsin, organized a protest at the district office of House Speaker Paul Ryan in the middle of a blizzard. Busloads of seniors from Fair Economy Illinois braved the storm to join them, arm in arm.

It is this commitment and sacrifice, repeated in actions around the country, that kept Congress from being able to pull the plug on health care coverage for more than 20 million people in July. It’s the same level of commitment we pledge to keep up into 2018 and beyond.

On a week when the worst tax legislation in the history of the republic has passed Congress, which will have terrible ripple effects for working people and deepen the racial wealth divide, it is easy to focus on the devastation of the past year.

But consider this: In April, People’s Action brought more than 1200 grassroots leaders to Washington to announce a “Rise Up” issue platform and proclaim an audacious agenda for moving “from protest to power.”

At this meeting,  more than 72 local leaders – overwhelmingly women, people of color and lower-income people – pledged to run for political office, with the encouragement of Sen. Bernie Sanders, who joined them onstage.

In the following months, several of them won. For example, Colorado People’s Action helped elect a three-member progressive bloc on the Aurora City Council, beating back candidates supported by regional fossil-fuel interests. In the suburban Seattle community of Tukwila, a magnet for immigrants hit with an anti-immigrant backlash, OneAmerica Votes member Zak Idan, a Somalian immigrant, landed a seat on the City Council.

These and other local victories are small steps, but they help build the foundation upon which we can build a fundamental transformation of our politics to advance racial, gender, and economic justice from the grassroots to the highest offices in the land.

So do the successes of Maine People’s Alliance in winning passage of Medicaid expansion in the state over opposition from Gov. Paul LePage, and the work of Reclaim Philly and the 215 People’s Alliance in getting Larry Krasner, an ally in the fight against mass incarceration of people of color, elected district attorney in Philadelphia. And the success in Alabama of The Ordinary People Society in restoring enough votes to the formerly incarcerated to keep Roy Moore out of the Senate.

The GOP’s tax giveaway has been a race by corporate insiders to loot our democracy for their own benefit. They want to grab as much as they can before they have to face voters in 2018. We can make sure the lawmakers who replace them will hold corporations – and our government – to account.

There are more fights ahead – to secure the rights of DREAMers and other immigrants; to protect health care, income security and retirement programs from the deeper cuts the GOP is gunning for; and to protect our public institutions and make them  accountable to the public good – instead of letting them be destroyed by corporations and the powerful.

But here’s the good news: Thanks to our organizing in 2017, we have a new sense of our power. We know that the way out of the Trump era is not through what gets handed to us by political consultants and big-money political donors.

We are the change we’ve been waiting for.

We know more struggles lie ahead, and we know how the economy is increasingly rigged against us. We know what our communities need to be better. We are gaining the audacity to color outside the lines drawn for us by our failed political establishment.

2017 taught us we can put our hearts, minds and bodies on the line, and win. And when we put ourselves on the line, we will land where we belong: taking the lead in remaking America.

Seeing that unfold in 2018 will be thrilling.

Hall and Goehl are co-directors of People's Action, Progressive Maryland's national umbrella organization for state-level activist groups like us. This article was published on Progressive Breakfast Dec. 22.