Who are the excluded? Not the rich...

As the 2020 session approaches, many experienced voices are reminding us that the legislative process, often masked in committee deliberations, steadily excludes different people from bills meant to be broad-ranging -- doing the bidding of business and corporations. It happened in the New Deal, and it happened (and is still happening) in the Maryland General Assembly. The lesson? We have to build power and organize now to fight the lobbyists and business interests that never stop chipping away at laws like paid sick leave and the $15 minimum wage.

/By Woody Woodruff<>PM BlogSpace Report/ When FDR was formulating the New Deal legislation that would enable US recovery from the most severe financial crisis the globalized world had ever seen, he had to get it through Congress.

Congress in the 1930s included many Democrats from the old Confederacy whose political careers had been forged in the era of Jim Crow. Cutting the deals that brought Social Security and the Works Progress Administration (WPA) that put millions of Americans back to work and gave them a future retirement to work towards meant placating those racist Democrats. So Social Security excluded agricultural workers and domestic workers – many of whom were African American. And the WPA was often de facto segregated and advantaged white youths. The grand hopes of progressives like Frances Perkins, the first female Secretary of Labor, for a full-dress New Deal that would quickly rehab the shattered US economy, were picked to pieces by racist and pro-business forces in Congress – a Congress that FDR needed to win over.

The New Deal is over three-quarters of a century old now, and its promise has been tattered in many ways. The federal government quite deliberately maintained the segregation of housing as it supported the postwar recovery  (see Richard Rothstein’s revelatory The Color of Law). Minorities were excluded from the postwar family wealth boom. The Taft-Hartley act of 1949 rolled back the advances that labor unions had made under the New Deal and began the decline in power of unions that has given business and corporations a nearly free hand to move their factories and activities overseas for low-cost labor. Labor was excluded while the ruling class raked it in. And the 1999 unraveling of the Glass-Steagall Act, passed in 1933 to control banks, allowed for the raging financialization of our economy that led directly to the 2008 Great Recession (which cost millions their homes, but bailed out big banks and cost no bankers any jail time). Homeowners were excluded from the general amnesty awarded to the rich.

Exclusions of the less powerful persist in Maryland, as around the country and the globe. In this year’s (2019) legislative session, a solid bill to get every worker – no exclusions – up to $15 an hour on a quick scale fell into the hands of business-friendly committees in the House (Economic Matters) and Senate (Finance) and

the exclusions came quickly. First, they came for the tipped workers – no $15 for them. Soon agricultural workers, some youth workers and part-time workers were excluded as well. The Senate Finance Committee chipped in to exclude employees of firms that had 15 or fewer working for them. Then the committees stretched the timeline out two more years before the wage reached $15, and made sure the fight would have to be fought all over again by excluding indexing for inflation – meaning by the time the wage actually reached $15, inflation would have eaten up the increase.

So the Fight for $15 was won, but at great cost. An exclusion here, an exclusion there, and its value to the workers for fought for it was much diminished. To add insult to injury, Gov. Larry Hogan vetoed even that diminished bill, forcing an override.

The session previously (2018), another fight was won – the fight for paid sick leave for Maryland’s workers, a law that gave over 700,000 Maryland workers the right to take a sick day, or care for a sick child, without losing a paycheck or risking termination.

Worker power was on the job for that one, too. But, as the Working Matters MD coalition is warning, the gains from that victory are already under threat.

“On February 11, 2018, the Maryland Healthy Working Families Act (HB1) finally took effect in Maryland, providing both paid and unpaid, job protected sick leave to thousands of Marylanders who faced loss of a paycheck or job loss when they or a family member fell ill, or 'safe time' where safety is at risk, such as domestic violence, sexual assault, or stalking.

Working Matters continued: “Unfortunately, immediately after the law took effect, efforts to peel back key provisions of the law began to surface, and continued during and after the 2019 legislative session in Annapolis.

“As we look ahead to the 2020 legislative session in Annapolis,” Working Matters continued, “we’ll need to continue to aggressively defend and protect the Act, now law, even as we lay the groundwork to expand and improve! 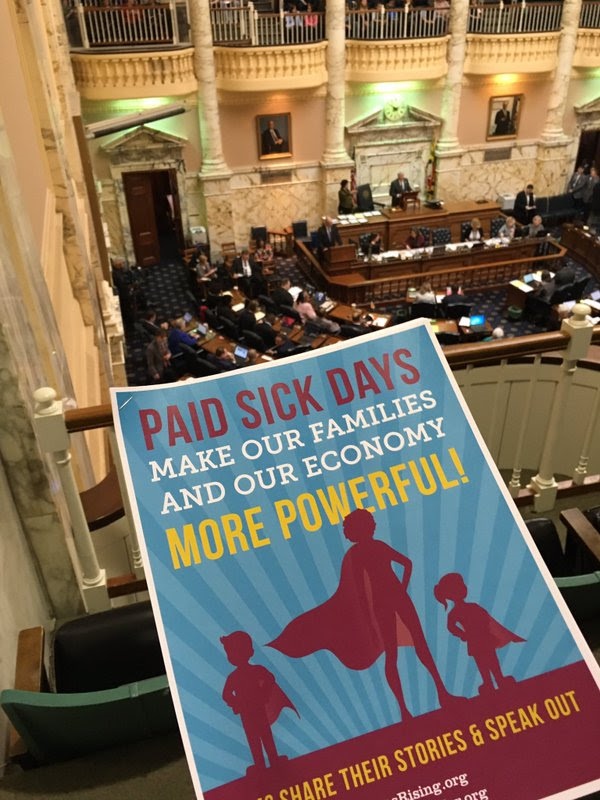 In particular, we will need to strategize around the following efforts that are sure to return in 2020 to weaken our hard-won protections:

As we see from Maryland Matters’ careful outline of likely attacks on the sick leave law, mobilization and power-building of the sort that led to passage of the (even though degraded) original bills for paid sick leave and the $15 minimum wage will be equally necessary to defend them. Exclusions, or the steady chipping-away at the broad coverage of these two pro-worker laws, are always on the agenda of those well-financed anti-worker forces in business and corporations. And they can afford the lobbyists that we cannot.

As with every legislative session, folks in every district and community need to start thinking about mobilizing now. What we at Progressive Maryland call “co-governing” – keeping the officials we have elected honest between elections – is important starting now and continuing all the way to Sine Die next year.