Progressive Maryland is building power in Montgomery County to take on corporate Democrats and resist the Trump agenda by fighting for family economic security, grassroots democracy, and community institutions that benefit all residents.

/By Justin Vest/ In May 2016, Progressive Maryland's Montgomery County staff and volunteers began developing a local network to better address the needs of the county and empower local residents to engage in progressive organizing. What started with a group of about 30 people has ballooned into a base of over 500 engaged residents--and hundreds more supporters--who regularly take part in bold actions to advance progressive policy and hold county officials accountable.

Progressive Montgomery--as the chapter is known--led the coalition in the Montgomery County #Fightfor15 campaign (igniting a similar statewide effort), successfully pushing a raise for workers through the nine-member council by a five-four vote, making it the first $15 minimum wage bill passed in 2017. Buoyed by corporate-backed members of the council, County Executive Ike Leggett vetoed the bill setting up a showdown between progressive and anti-worker Democrats in the upcoming 2018 council and executive races. Since then, Progressive Montgomery members have repeatedly confronted councilmembers at public forums over their opposition to the bill and continue to organize for a living wage for Montgomery County's working families.

And it's not just county officials being targeted for their unprogressive stances. Larry Hogan has been a regular target for Montgomery County members who have repeatedly called on the governor to hold a town hall and publicly state his positions on Donald Trump's agenda, especially as it relates to health care.  His continued silence prompted residents to disrupt a meeting of the Board of Public Works of which Hogan is a member.

Not content to settle for corporate-controlled politicians, Progressive Montgomery is working to fully fund the county's new public financing program which will provide matching funds for small-dollar contributions under $150. The program allows civic-minded residents to run competitive races for county office without relying on developers, corporations, or wealthy donors. This is an important step to increasing diversity among the county's elected officials, encouraging candidates to spend more time in their districts talking to constituents, and supports Progressive Maryland's statewide initiative to identify and train progressive candidates for 2018 and beyond.

Education is another issue of great concern to chapter members who have been attending the county's education budget forums to address concerns about the high rate of poverty among Montgomery County Public School students, the achievement gap, civil rights for LGBTQ students, and adequate funding for MCPS staff and programs. Members have also been active in opposing anti-immigrant groups targeting our schools and the backward education policies of Governor Hogan and Betsy DeVos.

Last week a group of about 50 members convened in the basement of the Silver Spring United Methodist Church for an organizing meeting to plot the organization's path forward. In a tremendous showing of support, members contributed over $3,000 at Tuesday's meeting by committing an average of $20/month to fund the chapter's work and putting us well on our way to meeting our goal of raising $5,000 by May. 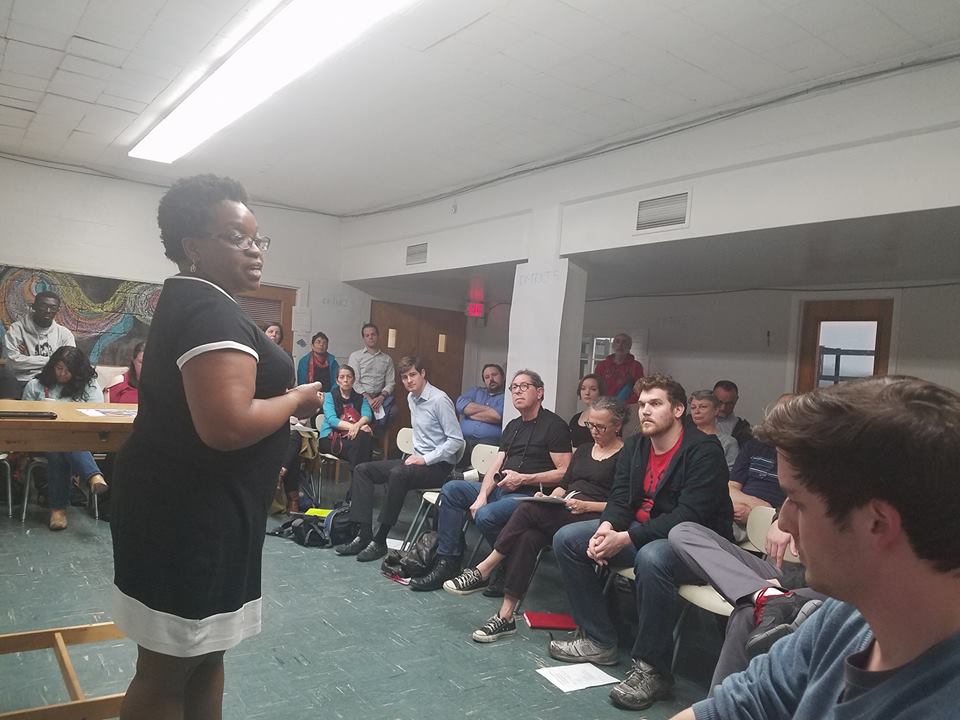 Attendees broke out into working groups in each of Progressive Montgomery's key issue areas--Family Economic Security, Grassroots Democracy, and Transformative Community--as well as Outreach and Leadership Development teams. In addition to our issue work, Progressive Montgomery is organizing district teams which will serve as organizing hubs in each of the five county council districts.

We're proud of everything our members have accomplished in such a short period of time and excited to embark on this new phase of the chapter's development. Visit Progressive Montgomery's page to learn more and sign up to get involved.