Rep. Andy Harris MUST VOTE NO to healthcare cuts!

Representative Andy Harris, MD, of Maryland's Congressional District 1 not only voted "YES" to the American Health Care Act that passed the U.S. House of Representatives, but he changed his vote from "no" to "YES" after the bill was changed to appeal to very-far right conservatives and passed with a very narrow margin.

Why does this matter now?

With the dissolution of support for the Senate Better Care Reconciliation Act, the message has been made clear that a “clean repeal of Obamacare without any replacement” is now the intended goal for conservative healthcare reform. The redirected effort will be “to vote on a pure repeal, with a two-year delay, by taking up the House’s health-care bill.” according to The Washington Post and multiple other news sources.

This is why we must let Rep. Harris know that Maryland's Congressional District 1 residents are still very much opposed to his "YES" vote for the American Health Care Act, and we remain opposed to him voting "YES" to repeal the Affordable Care Act!”* 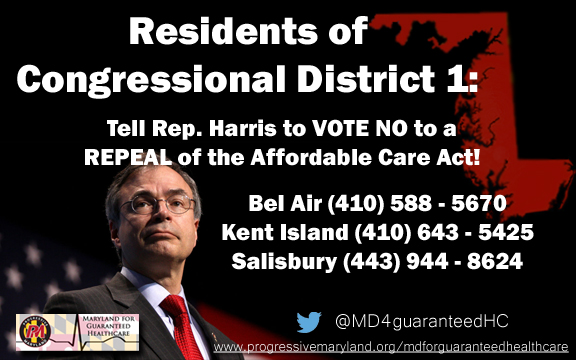 Tax cuts for millionaires while the middle- and low-income people suffer?! We at Progressive Maryland say NO WAY!

*Prior petition language named specific bills. None of the specific legislative attempts on healthcare reform have targeted increasing access and quality healthcare for Marylanders and Americans. Names of bills have been withdrawn and replaced with the ask of Representative Harris to oppose ANY legislation that harms healthcare for the people of our state and nation.