There is no "progressive" case for NATO: a response

If local progressives and leftists want to ensure stability and democracy, they should look beyond outdated military alliances. Two Montgomery County leftists reviewed the history of NATO and how it is viewed by international left parties in Europe, what they find shows NATO is anything but a stabilizing or democratic force.

/By Dylan Shelton and William Spieler/ It was interesting to see the Progressive Maryland blog introduce a post on a foreign policy subject earlier this week. Anyone hoping to be challenged by Jared Schablein’s [July 25] piece “Supporting NATO is Progressive” would be disappointed, however. The piece did not make a sufficient case for NATO being progressive and did not attempt to refute or acknowledge existing leftist criticisms of NATO.

The argument that NATO is progressive hinges on a few assumptions about NATO’s benefits it allegedly confers onto member states, partners and the world more generally. According to Schablein, these benefits include facilitating trade, maintaining security, and upholding democracy.

The extent to which trade between NATO allies is equitable, and therefore progressive, is questionable. Under NATO’s defense umbrella, the primary economic players in the alliance, the United States and the EU, can demand ruthless neoliberal economic policies from the weaker states. Germany commands the European Union’s economic policies due to their high exports and control over debt repayment decisions for smaller members. The history of the European financial crisis is a history of Germany squeezing resources and capital from smaller nations through austerity and debt repayment plans, with the threat of being cut out of the EU, IMF and NATO partnerships if they do not comply.

An organization that enhances trade under the terms of the EU means it also enhances the EU free-trade agreements. These agreements lead to the rapid accumulation of wealth in the top one percent of European oligarchs. NATO is complicit in heightening austerity policies that inevitably lead to higher suicide rates, economic depression, and fueling of right-wing nationalism. The rise in restrictive immigration policies in the EU is one example of a natural byproduct of austerity politics.

Focusing on NATO’s trade benefits also belittles its origins as a military alliance. Countries like Turkey, Greece, Portugal, Spain and Eastern European are invaluable strategic points on the European map. While admitting the origins of NATO lie in anti-Soviet containment, the piece fails to consider that trade policies were a form of economic warfare limiting the growth and influence of socialist economics. These anti-progressive policies continue to this day. The experience of Greece under Syriza can hardly be said to be the apogee of progressive politics.

It is claimed that NATO has been a force of stability and has kept peace in Europe for seven decades. We disagree. In fact, NATO may be causing the very unrest it seeks to mitigate. 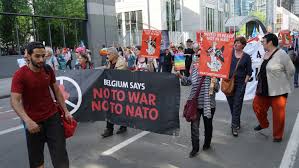 Nearly every example brought up regarding NATO military intervention can be interpreted as a strategic and humanitarian failure. In Kosovo, the NATO coalition bombings actually catalyzed more brutal atrocities than were occurring before the alliance took military action. In 2000, Amnesty International released a report claiming the indiscriminate NATO bombing of Kosovo constituted war crimes.

Former State Department official under President Clinton Strobe Talbott admitted, "…It was Yugoslavia's resistance to the broader trends of political and economic reform--not the plight of the Kosovar Albanians--that best explains NATO's war." Trade at the point of a bayonet can hardly be said to be democratic or progressive.

The very presence of foreign troops, in a country as familiar with foreign invasion as Afghanistan, breeds more resentment and resistance that keep its insurgencies alive.  This conflict continues with no end in sight despite the loss of hundreds of thousands of civilian lives. In 2011, across the border from Afghanistan, NATO bombed a Pakistani military base for two hours killing 26 Pakistani soldiers in what is known as the Salala Incident.

NATO action off the coast of Somalia is far more complicated than the “Captain Phillips” movie suggests. The “pirates” also exist to ward off EU (read: NATO) countries who are dumping their nuclear waste onto the Somali coast while the country was operating without a centralized government. Piracy will continue until there is some agreement to end this destructive dumping, until then, a Somali writer says, “We do not want the EU and NATO serving as a shield for these nuclear waste-dumping hoodlums.”

NATO also disastrously intervened in Libya, which even President Obama regards as his worst mistake. The country is now split between two or more rival governing factions, whose members rove the countryside killing indiscriminately. Militant extremists and weapons are smuggled from Libya through the proxy of NATO-member country Turkey into Syrian extremist camps. Migrants flee the country, many drowning in the Mediterranean because EU-supported right-wing austerity has led to immigrants being unjustly persecuted and feared by national governments and their people.

The history of NATO’s expansion eastward refutes the claim that it was the Russians who precipitated the need for a NATO military presence in Eastern Europe. The chain of events is in reality the opposite; declassified documents show NATO moved east in opposition to agreements made during and just after the Cold War.

George Kennan was the father of the Cold War “containment” policy against the Soviet Union that is ostensibly the basis for NATO’s existence. At the time of NATO’s expansion during the late 1990s, Kennan remarked to New York Times’s Thomas Friedman, “There was no reason for this whatsoever...Of course there is going to be a bad reaction from Russia, and then [the NATO expanders] will say that we always told you that is how the Russians are -- but this is just wrong.”

Finally, how does NATO achieve a resemblance of “stability” in Europe? Through undemocratic means and subversion. It has regularly used totalitarian strongmen to secure strategic locations on the globe and has promoted undemocratic movements to overthrow or destabilize elected governments.

One of the founding countries of NATO was Portugal, which at the time was ruled by the dictator António de Oliveira Salazar, showing how NATO’s commitment to democracy had never existed. The United States even wanted to Franco’s reactionary Spanish dictatorship in the original founding NATO countries, but the resistance by other nations was too strong. Presently, NATO sits silently while Turkish strongman President Erdogan violently cracks down on peaceful civilian protests in Gezi Park and oppresses the disenfranchised Kurdish minority in Turkey.

NATO member countries have also undergone military coups without any action on NATO’s behalf to stop them. A military junta ruled Greece after a coup in the 1960s. Turkey has had numerous successful and attempted coups through its existence as a NATO partner, the latest being just two years ago.

NATO has historically aided and abetted right-wing political and paramilitary organizations to counter organic left-wing movements. After World War II, the US through the CIA and the Western powers through NATO established “stay behind” networks in most European countries, consisting of far-right, anti-communist paramilitaries, which, needless to say, are incompatible with any vision of a progressive society.

Since the end of the Cold War, NATO has shifted to protecting American and EU economic domination over the globe, despite it being Western powers that first created the problems NATO is mandated to act against.

It is hard to believe Trump could actually affect a withdrawal of the US from NATO. As Schablein admits in his article, Trump’s cabinet and advisors do not want such a thing. But this isn’t a result of their maturity; rather they are clinging to the established US foreign policy agenda that has stretched back to the beginning of the Cold War. Proof of Trump’s capitulation to foreign policy status quo is the fact that Henry Kissinger is advising him to leverage Russia against a rising Chinese powerhouse.

Most importantly, if the left wants to make a progressive case for an international institution, that case must rely on international sources and perspectives. The leaders of the three fastest growing left-wing movements in Europe all are skeptical of NATO’s usefulness in the 21st century.

Jeremy Corbyn called NATO, “a Cold War organisation, it should have been wound up in 1990 along with the Warsaw Pact." French leftist leader Jean-Luc Mélenchon grouped NATO in with the EU as organizations that  "strangle the voice of the people."  The Spanish Podemos party leader Pablo Iglesias has likewise condemned the EU’s European Central Bank and NATO, and said he would “absolutely” withdraw Spain from the alliance if elected.

All this points to a considerable energy on the international left to reevaluate 20th-century forms of international politics that have placed trade, protection, and democracy on an imperial war economy foundation.

If the progressive left wants to keep up with our international comrades, we should focus on making international organizations based on solidarity and not security, on democracy instead of deception, and cooperation over containment. A left that doesn’t do so is doomed to fall prey to the war pigs of the foreign policy establishment.