Hatemonger Donald Trump's visit to Worcester County on the Eastern Shore did not go uncontested. Students and community members rallied to protest his appearance at Stephen Decatur Middle School, and one of those students has the story for us. 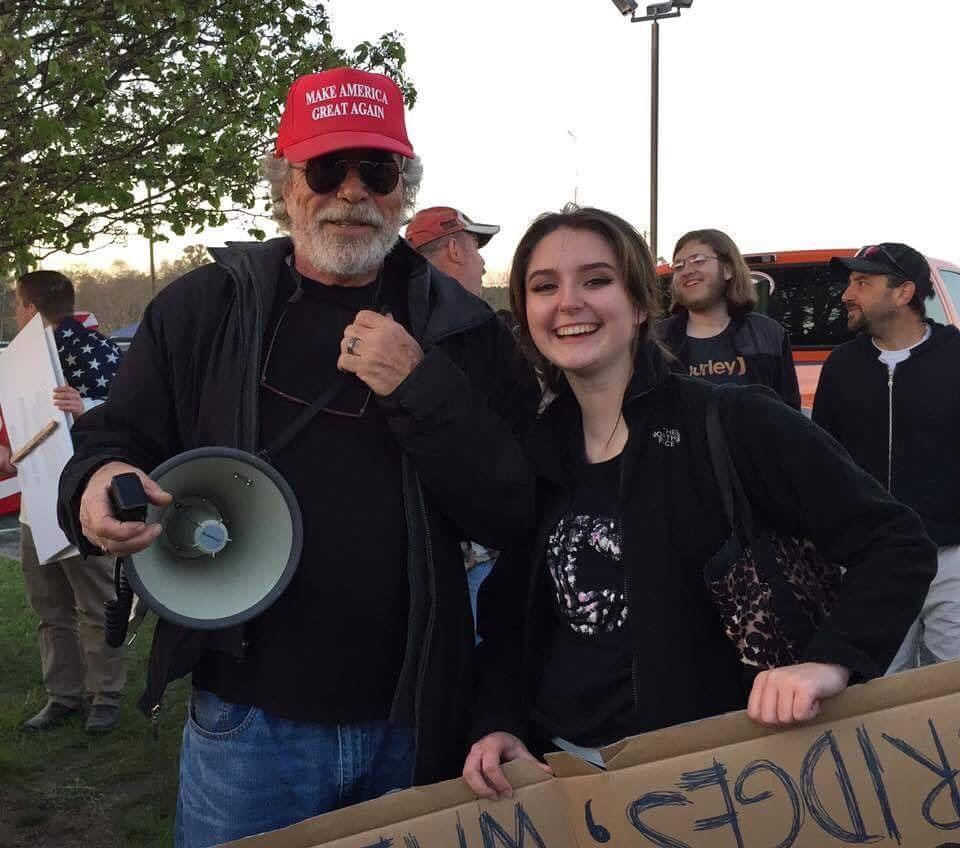 /By Gabrielle “Frankie” Franks/ As a 17-year-old Eastern Shore native, I never expected that I’d ever be the one credited for organizing a large-scale protest at a Donald Trump Rally.

On Monday, April 18th, I was scrolling through my Facebook news feed when I happened upon an article from a local news station. The article, titled “Donald Trump Confirmed to Speak at Stephen Decatur High School in Worcester County,” confirmed the rumors that had been going around that the infamous presidential candidate would be rallying at a local high school. I was furious. Within minutes, I created an event page for a strictly peaceful protest, and invited a good amount of my close friends who I knew would join me. Within a few hours, the event page grew exponentially. By the next morning, over 1000 people had been invited, with over 200 marked as “Going” and over 400 marked as “Interested”. I was absolutely blown away.

Being a native to the Eastern Shore of Delmarva, I was stunned that there was so much support for a protest against a GOP candidate. The fact that Trump would even BE here was insane to me, but I was quickly given a huge amount of support by people from the area that I didn’t even know. As a progressive in a majorly conservative area, I’ve already been faced with a lot of negativity in my community; I’m currently a senior at Mardela Middle and High School, where the graduating class is about 90 people and most families are in the agricultural industry. I’ve had a Bernie Sanders sticker peeled off of my car (which was technically vandalism, but I handled the issue myself) that I later replaced with the free one I’d received from the campaign, and groups of 11th grade boys wearing camo hats and M.R. Duck shirts yell “FEEL THE BERN” and “MAKE AMERICA GREAT AGAIN” at me multiple times. I’m only in the school for about an hour each day, yet I’m still receiving hateful comments from other students who think being politically involved is pointless. I don’t take the attacks personally, because I realize they like to antagonize people for fun—that’s what most teenage boys like to do, in my experience—but it’s disappointing to see this so often in my community.

I arrived at Stephen Decatur at about 4 p.m. on Wednesday, and made sure to contact law enforcement as soon as I could to ask where the group was permitted to stand. I was told that protesters were not allowed on the school grounds, so I made my way across the street and followed the unbelievably long line of Trump supporters to the Harley-Davidson lot. There, next to a couple of WBOC vans, I found a small group of protesters that had already arrived. A group of students from Decatur had set up their own silent protest and were demonstrating when I got there, so I went over to the few from my group that I recognized. Within the hour, we had at least 50 more protesters show up to help us; by 6 p.m., there were at least 150 of us. The group grew to over 200 if I had to guess, and the night was spent passionately yelling chants such as “Right-Wing Fascists Go Away! Racist, Sexist, Anti-Gay,” “Dump Trump,” and “Build Bridges, Not Walls!” While I made it clear that our group was to remain peaceful—saying to everyone “do not incite violence or hate speech” about 30 times—I couldn’t possibly control every person in the group. Throughout the night, I was pushing people back, away from the police officers that separated our group from the Trump supporters. Arguments ensued, and supporters yelled insults at our group, telling us to “get a job,” to which we all laughed and responded “we have jobs!” A couple of times, a group of twenty-something Trump supporters singled out one of our protesters, yelling “virgin” repeatedly, and it was not only embarrassing, but an absolute caricature of the Frat-Bro-Trump Supporter that you hear about online. It only fueled our passion.

By 7 p.m., all the Trump supporters who could had gone inside, and our group moved to the very edge of the road across from Decatur. At this time, everyone was very calm, and I had a chance to speak with a couple of the Trump supporters that hadn’t gotten a chance to enter the building. Among them, I spoke to a self-proclaimed “Nazi who hates women and Muslims,” and when I spoke with him, he told me he was only saying terrible things to make our group angry. We spoke for about 30 minutes on our very different beliefs, and thanked the other for listening. He was kind to me, and though we disagreed on many issues, we didn’t argue once. Someone passing us actually stopped to take a picture of the moment, because it was “so unexpected” that we could have a peaceful conversation—a very wrong assumption. Conversations like this were why I had organized the protest. I wanted to convey a peaceful message to those who may have been misled by Trump’s entertaining façade and hateful rhetoric. Again, though, I cannot control the actions of all of the protesters, and some of them didn’t know how to remain peaceful. At 8:30, supporters and protesters began to leave, and a group of about 100 of us stood at the road, telling everyone to drive safe and have a good night. By 9 p.m., everyone had left.

As I walked to my car, I was stopped by a guy who asked me about my religion; because I was in such a good mood, I listened to him speak to me while, at the same time, exiting Trump supporters yelled rude comments and insults at me. We both paid them no mind, and at the end of the conversation, he told me he didn’t realize I was a protester, and that he’d bought a shirt from the rally. He shook my hand and thanked me for being peaceful, and for even being there in the first place. I walked to my car with a stupid grin on my face and drove home. It was safe to say that our protest, my first, had been a success.