Join us in Annapolis TOMORROW evening to fight for health care and remember the victims of gun violence in Las Vegas.

Why? Because the assault on the health security of working families never stops, even after the last ACA repeal effort crashed and burned on the floor of the US Senate. Budget shenanigans going on right now mask still another assault on Medicaid funding for the states, and existing coverage is undermined by negligence by executive agencies responsible – by law – for maintaining the ACA as law of the land.

Most grievously, the Medicaid-linked Child Health Insurance Program (CHIP) was allowed by the US Congress to expire last week at the end of the fiscal year, putting 9 million kids nationwide (and about 140,000 in Maryland) at risk and under the 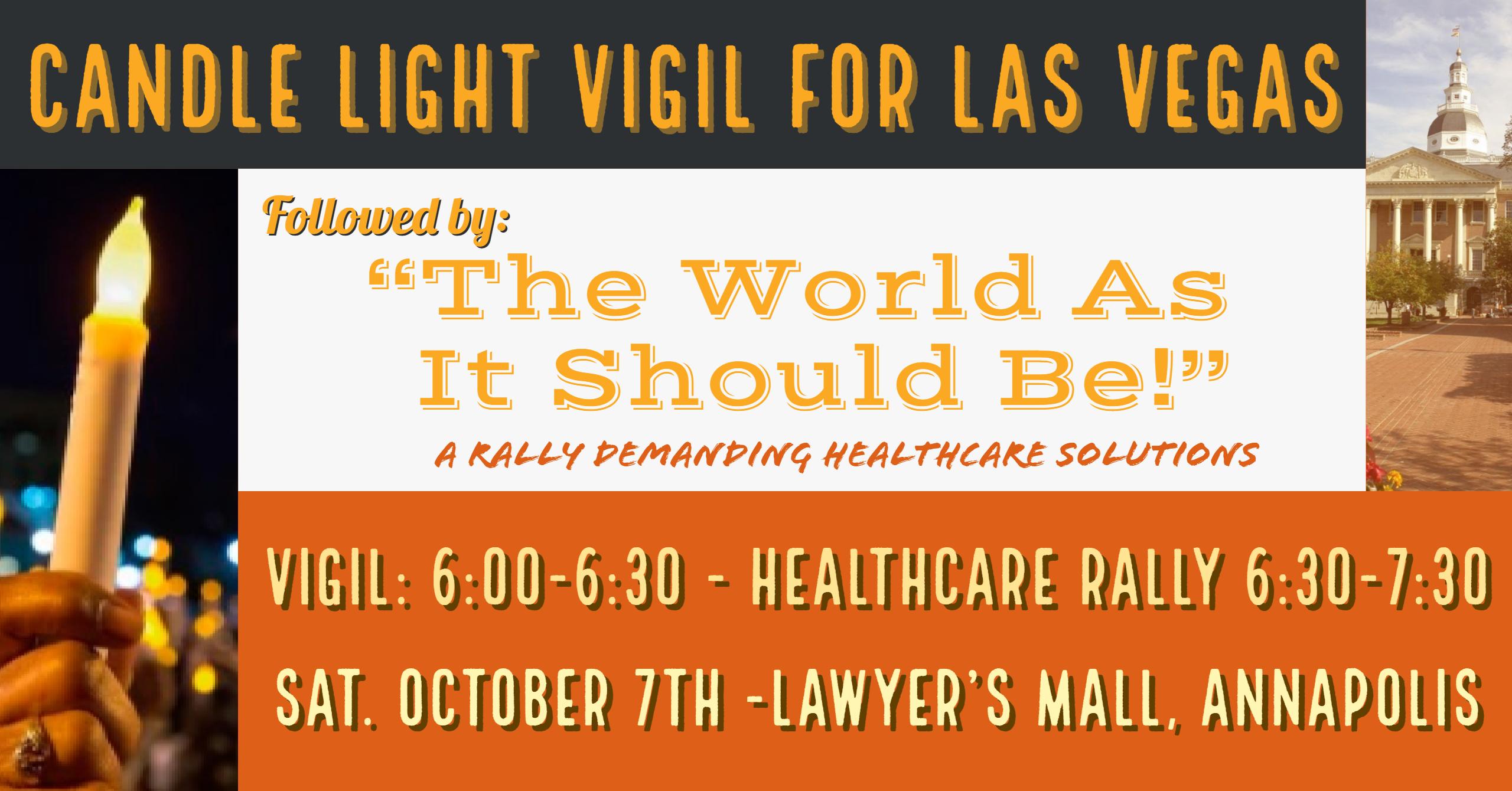 LeeAnn Hall of People’s Action deftly summarized the loss: “CHIP is a partnership between states and the federal government that since 1997 has extended health care to millions who would otherwise have no access to care.

“As an organizer in rural Idaho in the nineties, I saw with my own eyes the difference CHIP makes in the lives of ordinary people. Thousands of children and expectant mothers in our state got access, many for the first time, to everything from checkups and healthy care to treatments for chronic asthma and cancer.

“The benefits of CHIP are profound, and have a ripple effect. By ensuring adequate care, CHIP eliminates a major factor that keeps children from attending and excelling at school, and thriving in our society.”

So at our rally in Annapolis tomorrow (Oct. 7) – preceded by a candlelight vigil for the Las Vegas victims of a different instance of Congressional near-criminal, lethal negligence – we’ll tell members of Congress like Maryland’s Andy Harris that they’d better wake up.

“So why would Congress let a program like CHIP, which has proven its ability to make such a difference in so many lives, expire? As recently as a few weeks ago, GOP lawmakers celebrated CHIP’s achievements, swore to support it and even held it up as an example of a successful partnership between the federal government and states.

“But as soon as they revived their dream of a health repeal that would gut Medicaid and the Affordable Care Act and score a legislative victory, they rushed out of the room, and abandoned CHIP. As a result, nine million lives now hang in the balance. …”

“Now, some lawmakers say they might support a temporary extension of CHIP, but only if the funds come from backdoor cuts of billions to Medicaid, the ACA and to seniors.

“This is outrageous. Our health is not a zero-sum game, and shouldn’t even be up for debate: you don’t play politics with peoples’s lives.

“Lawmakers must remember that the measure of our society, and how they will be judged by voters, is by how well we defend the rights of those who can least defend themselves.

“Support for CHIP and other lifesaving programs should be permanent, and never become a political football. Indeed, we should – and can – extend health care to all, and ultimately, we will. But first, let’s tell our lawmakers to save CHIP now.”

We here in Maryland can advance that process with our witness. See you in Annapolis tomorrow night, for all the victims of a Congress that is in no way working for the people of this country.